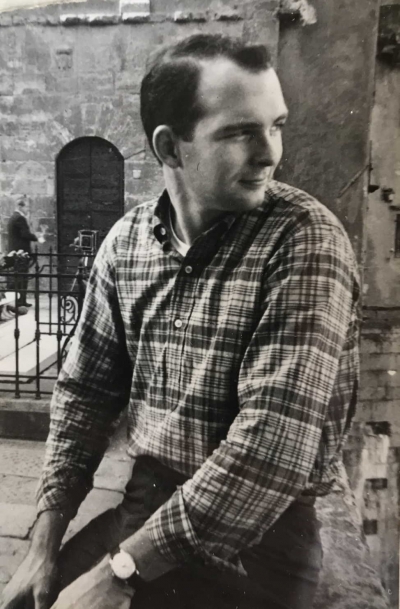 Rob Cormack, who was born in Madurai, India, passed away on the morning of December 5th in Palo Alto, with his daughters holding his hands. The cause was advanced prostate cancer. He was predeceased by his wife Ann Miller Cormack in 2016 and is survived by his daughters Alison (Tom Kuhnle) and Sara Cherry (Brian), grandchildren Megan, Scott, and Alex, and his brother Captain James P. (Pete) Cormack.

Rob attended Stanford as an Alfred P. Sloan scholar and graduated in 1964 with a five-year degree in architecture. He won a Fulbright scholarship to research architecture in India and received an MBA from Harvard Business School in 1971. While his early career was as an architect, he soon found that he was better at the business side of that work and spent the rest of his career in real estate management, first on the East Coast and eventually retiring from GBA in San Francisco.

Rob and Ann enjoyed traveling to Italy where they met, to Africa on safari with friends, throughout New Zealand and Australia to hike, and on special trips with their older grandchildren to see whales in Mexico and to watch the Women’s World Cup in Germany.

Rob cared deeply about his family and was a loving and caring husband, father and grandfather. Rob created many pieces of wooden furniture for the family, starting with a crib and a rocking horse for his baby daughters and ending with a treehouse for his grandchildren. His love for architecture and wood were combined in the house he and Ann built at Sea Ranch, which hosted many happy times with friends and family.

Rob had a wry sense of humor and appreciated a good trick, especially the annual Big Game hijinks that he engaged in with neighbors who were Berkeley fans. One of Rob’s other great qualities was a willingness to uncomplainingly wash however many dishes there were in the kitchen after one of Ann’s elaborate meals. He was also an avid runner and skier for much of his life.

At Rob’s request, there will be no service. The Yosemite Conservancy supports one of his favorite places in the world. We invite you to remember Rob when you take a hike, pet a kitty cat, or admire a fine piece of woodwork.

Photo Gallery
0 photos Upload a photo
Remembrances
0 entries Submit a remembrance
Make a donation
https://yosemite.org/
About this site     Contact us