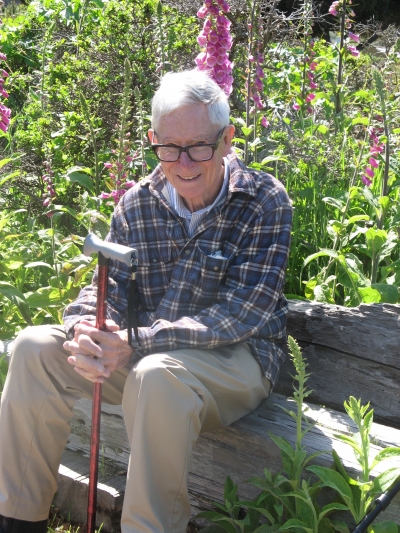 Robert L. (“Buzz”) Baldwin died on March 6, 2021, at the age of 93, in his home in Los Trancos Woods. He was born on September 30, 1927, in Madison, Wisconsin, the son of Ira Lawrence Baldwin and Mary Lesh Baldwin. He was called Buzz because an older sister couldn’t pronounce “brother,” and the name stuck when there were four Roberts in his first-grade class.

Buzz was drafted into the army at the end of World War II and trained in code-breaking school. Following the war, he reentered college and received a B.A. in Chemistry in 1950 from the University of Wisconsin. Buzz went on to become a Rhodes Scholar, and earned a D. Phil in Biochemistry in 1954 from Oxford University in England. During the subsequent five years, he served as a postdoctoral fellow and then faculty member at the University of Wisconsin, and as a Guggenheim Fellow in Copenhagen.

In 1959, Buzz joined the newly created Department of Biochemistry (chaired by the late Arthur Kornberg) at Stanford University School of Medicine. He was promoted to Professor in 1964 and served as Chairman of the Department from 1989 – 1994. He became Emeritus in 1998, but continued to work actively in his field for another ten years.

During his first year at Stanford, Buzz lived in an apartment in Mountain View. While visiting a friend for lunch in Los Trancos Woods one weekend, he looked around at his beautiful surroundings and thought to himself, “What am I doing in Mountain View?” Soon after that, he bought the house in which he lived until he died, and in which he and his wife, Anne, raised their two sons. He and Anne had been married next door in the garden of George and Myrtle Black in 1965. He very much valued the Los Trancos Woods community, with neighbors who were also good friends and supportive of each other.

Buzz was a gentle person, who loved the woods. He knew the local wildflowers by their Latin names, and loved to hike, and to garden. He also enjoyed skiing and rock climbing. He took his family on backpacking trips to the Sierras, and also annually took his research group for a week of skiing. Buzz enjoyed travelling. He was grateful for the opportunities he had to attend international scientific meetings. His whole family benefited from a sabbatical in Paris in 1972-73, and another in Cambridge, England, in 1978-79.

Buzz thought deeply about many things, and enjoyed art and music, but he was first and foremost a scientist. He dedicated his life to thinking about the important unsolved problems in biochemistry. His career spanned the years when fundamental questions about life were becoming accessible to experiments at a molecular level, and he often remarked how lucky he was to be a scientist at just this time.

The structure of DNA, which led to the solving of the genetic code, was only the beginning of this explosion of knowledge. Each gene defined the amino acid sequence of a protein, but the activity of the protein depended on its three-dimensional, folded shape. The subtle factors that determined the fast and reproducible folding process were the subject of Buzz’s research over much of his career. In the process, he trained many students who went on to successful careers of their own, and to whom he was devoted. He advised them to focus on important problems, and they took his advice to heart.

Buzz was elected to the U.S. National Academy of Sciences in 1980 and to the American Academy of Arts and Sciences in 1981. He received the Stein & Moore Award from the Protein Society in 1992, the Wheland Award in Chemistry from the University of Chicago in 1995, the Merck Award from the American Society for Biochemistry and Molecular Biology in 1999 and the Founder’s Award from the Biophysical Society in 1999. He has been an editor of the Journal of Molecular Biology and of Biochemistry.

He is survived by his wife of 55 years, Anne Norris Baldwin; two sons, David N. Baldwin of Seattle, WA, and his wife, Jen Johnson, and Eric L. Baldwin, of Urbana, IL, and his partner, Sarka Petranova; three grandsons, Elias A. Baldwin, Julian N. Baldwin, and Kasper J. Baldwin; and two step-grandchildren, Al and Twyla Johnson. He was devoted to his immediate family, and also to the family of his sister, Helen Guptill, who predeceased him. He will be greatly missed by all.