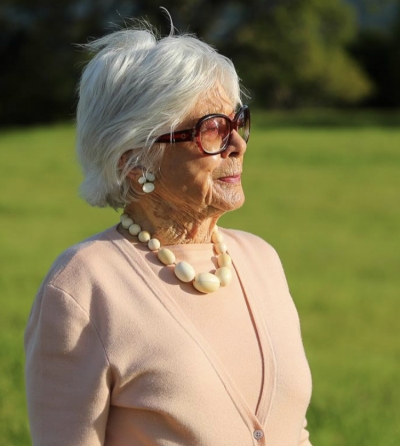 Robin Quist Gates, known as "Binnie" by family and friends, died peacefully at home in Woodside, California on March 21, 2021. She was 93 years old. Those who knew Binnie knew her humor, grace and generosity. She contributed widely and quietly to local universities, animal shelters, public museums and women’s health non-profits. She always kept an eye out for those in need including, most recently, the Center for Farmworker Families in Watsonville in response to COVID and the wildfires of 2020. Binnie served as Trustee of the San Francisco Museum of Modern Art, was a longtime supporter of the Palo Alto Medical Foundation, a volunteer and supporter at the Woodside Village Church, and a long-time member of the Menlo Country Club. Binnie was born in Palo Alto, the youngest of two daughters, to Catherine and Robert “Dink” Templeton, a longstanding track coach at Stanford and former Olympian. As a child, Binnie lived on the Stanford campus and later attended Palo Alto High School, spending her free time as a member of the ski club. She and her sister Jean were known as “the Templeton Girls.” Stanford continued to play an important part in her life. While home from her undergraduate years at UCLA, Binnie met George Quist of San Francisco, a student and football star at Stanford. After marrying in 1948, the couple resided briefly in Houston, Texas and Grand Rapids, Michigan before returning to the Bay Area and settling in Woodside with their four children Bob, Peter, Cathy, and Sarah. In 1968, George founded Hambrecht & Quist, a pioneering investment bank focused on technology and responsible for the IPOs of Apple, Genentech and others. George died of a heart attack in 1982 at the age of 57. In 1988, Binnie married Milo (Ned) Gates. Their combined families consisted of nine adult children and, including spouses and grandchildren, grew to over 50 family members. Together, they reinforced each other's love of family. Their vacations and reunions brought everyone together, including 40-person annual trips to the Big Island in Hawaii and 100-person family Christmas parties. Lake Tahoe and Pajaro Dunes were also back-drops for Binnie’s large circle of family and friends. She enjoyed gathering everyone for all occasions, and never forgot a birthday, graduation or celebration. Binnie’s home was a constant meeting place for family, and exuded the happy, loving, and aesthetic energy she nurtured. For an occasional break from the crowd, she loved fly-fishing with Ned on the Henry's Fork of the Snake River in Idaho and never missed a sporting event, cheering on the Raiders, 49er’s, Giants, Warriors and, of course, Stanford. Binnie was an avid art collector, though her humility would cause her to reject the label throughout her life. When her children left home, she went back to school in the early 1970s graduating from San Jose State University, and taking art classes at Canada College, where she discovered the work of Henry Moore, an artist she came to know personally. Binnie served on SFMOMA’s Board of Trustees. She collected works by Moore, Milton Avery, Alex Katz, Claes Oldenburg and Barbara Hepworth, among others. Her home, and her art, reflected her spirit -- warm, tasteful and not to be taken seriously. At the top of her driveway, family and friends were greeted by a monumental hare, by Barry Flannagan, leaping out from the garden. The view from her picture windows looked out to a Moore bronze, with the vineyard and redwood mountains beyond. Her dining room was lined with an erotic Etruscan-like frieze by Tom Otterness, while a 10-foot neon Greyhound bus sign lit up the space over her kitchen island. Binnie was happiest living amongst art. Binnie is survived by her two daughters Cathy Quist Brisbin and Sarah Quist Dolbey and daughters-in-law Leslie Quist and Charline Douty; her stepchildren Elena Gates Motlow, Susan Gates Suman, Virginia Lewis, Anne Symington and Milo Gates; her 25 grandchildren, and 5 great-grandchildren.

Services will be private. Donations in Binnie’s name can be made to The Woodside Village Church at www.wvchurch.org.