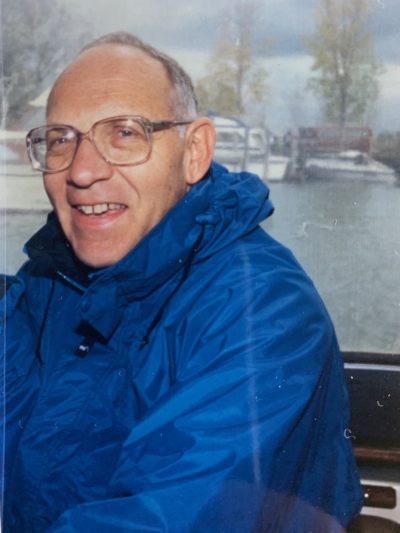 Roland Finston, 83, of Palo Alto passed away on 6/3/20 after suffering an injury.  Roland was born in Chicago, IL and worked at Stanford University as a Health Physicist, and later as Dept Manager.  He graduated from University of Chicago in 1957 with a Bachelor of Physics and then a Master in Science in Health Physics from Vanderbilt University in 1959, and graduated from Cornell University in 1965 with a Doctor of Philosophy in Biophysics. He was a Professor of Radiologic Physics at Oregon State University 1965-1966.  1966-1995 Roland was employed at Stanford University.

Roland was an expert in radionuclide dosimetry and served on Stanford's Human Use Radioisotope Committee under an approval by the FDA for Radiopharmaceutical Research.  He was called upon as an expert witness in many cases related to radiation exposure and was quoted in the New York Times and other local and national media during the events of Three Mile Island and Chernobyl. Roland testified as an expert witness during the Environmental Impact Hearings for Diablo Canyon Nuclear Reactor.

Roland was very civically minded and lent his expertise to many local and political movements.  He served on the USE (United Stanford Employees) Executive Committee during its formation in the early 1970's.  He also served on the Board of the Palo Alto Cable Co-op and helped oversee its transition to Comcast during the merger/buyout.  Roland enjoyed riding his bicycle and up until his death could be seen riding the streets of Palo Alto for groceries and other errands.  He enjoyed bowling at Tressider Student Union at Stanford in the Stanford Leagues and then Homestead Lanes in Cupertino in the Senior Leagues.

Roland is survived by Gloria Finston (spouse), Peter Finston (brother) and sons Glen and Alan Finston, Daughter in Law Joni Finston, and Grandchildren Jacob and Isabel Finston.  In lieu of Flowers, donations may be made to Palo Alto Community Fund.  Funeral Services will be held at a later date due to COVID-19.

Photo Gallery
0 photos Upload a photo
Remembrances
1 entry Submit a remembrance
From Alan Finston
June 10, 2020
In addition, Roland was a true community servant and was a significant donor to the Palo Alto Bloodbank. Being O positive, he was a universal donor and was frequently called upon to donate during shortages and crises. He was also an amazing mechani...
Read more
Memorial service
to be determined after COVID-19 restrictions are lifted
Make a donation
In lieu of Flowers, donations may be made to Palo Alto Community Fund
About this site     Contact us