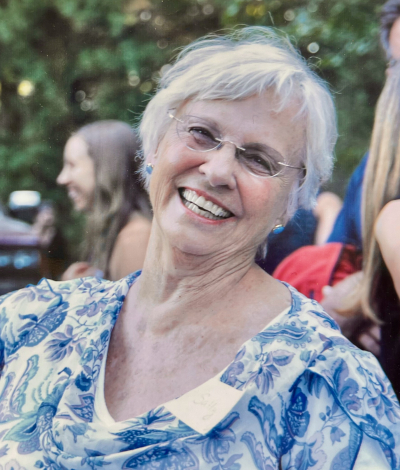 Sally Collins Young passed away on September 2, 2022 at Stanford Hospital at the age of 86. She was born on October 25, 1935 in Hammond, Indiana, the third child of Edward Durbin Collins and Kathryn Huchel Collins. Her father worked in the limestone and lumber businesses. Her mother managed a family-owned bookstore. Early in life, she grew up on a working farm in Wayne, Illinois, where she attended a one room school-house. She had many stories and fond memories of life on the farm, especially with her grandmother whom she called ‘Nonny.’

Her family moved to Joliet, Illinois, where she attended Joliet Township High School. She was active in the performing arts, including theater, choir, and musicals. She had lead roles in “Dear Ruth” and “HMS Pinafore” and was the sponsor of her high school’s marching band which represented Illinois in the inauguration of President Eisenhower. She also had a rich social life and her dance card was always full!

In 1953, Sally moved out west to matriculate at Mills College in Oakland, California. She majored in history and government, graduating in 1957. Her studies at Mills instilled in her lifelong passions for art, music and literature. After college, she moved to San Francisco, delighting in the city’s cultural offerings while working in the travel industry. She met her husband, John Van Winkle Young, a fellow member of the Bach Choir, in San Francisco, and they married in 1961 and began a loving and adventurous union.

Sally and John lived in Menlo Park where they raised their two children, John and Susan. Sally was a homemaker and piano teacher. She was a part of many different social communities, including those connected to her neighborhood, her churches, and the Palo Alto Medical Clinic, where her husband John was an internist. She and John took advantage of sabbaticals and vacations to indulge their curiosity about other countries and cultures, returning with rich stories, always told with her trademark vivacity and wit. An excellent cook, Sally frequently entertained, and she used her gifts of hospitality and service as a deacon at Menlo Park Presbyterian Church. In her later years, she worshiped at Trinity Church in Menlo Park and supported various of their ministries. In 2019, she moved to the Vi at Palo Alto.

Sally is most remembered for how she made others feel special and ‘seen.’ She was warm, welcoming, compassionate, and vivacious. She was known for her wholehearted authenticity, which engaged people and at times even got her into a little bit of trouble. She delighted in her children and grandchildren, celebrating their unique interests and capabilities, and in turn, passing on to them some of her own passions. She instilled in those around her a deep appreciation for natural beauty. Her home was graced with flowers, color, and light, and gatherings there were marked by liveliness and laughter. She created annual family rituals of camping and hiking in the mountains (especially the Tahoe Basin area) that became sacred time for the family and created deep, life-long bonds for all who participated.

Sally was predeceased by her husband John in 2013, and by her parents and brother, Lou. She is survived by her sister, Ann Teachout; her son John Q. (Jennifer) Young; her daughter Susan (Roderick) MacLeod, and her five grandchildren (Hannah, Naomi, Matt, Abbie and Alex) who knew her as ‘Nonny.’ In lieu of flowers, donations can be made to Trinity Church in Menlo Park (https://www.trinitymenlopark.org/), or to KQED Public Radio (KQED.org). A memorial service at Trinity Church will be held on January 21, 2023 at 2:00 PM. Notes of remembrance are cherished and can be sent to Trinity Church, attn: Susan MacLeod, 330 Ravenswood Ave., Menlo Park, CA, 94025.

Photo Gallery
0 photos Upload a photo
Remembrances
0 entries Submit a remembrance
Memorial service
A memorial service will be held on January 21, 2023 at 2:00 PM at Trinity Church in Menlo Park, California.
Make a donation
In lieu of flowers, donations can be made to Trinity Church in Menlo Park (https://www.trinitymenlopark.org/), or to KQED Public Radio (KQED.org).
About this site     Contact us