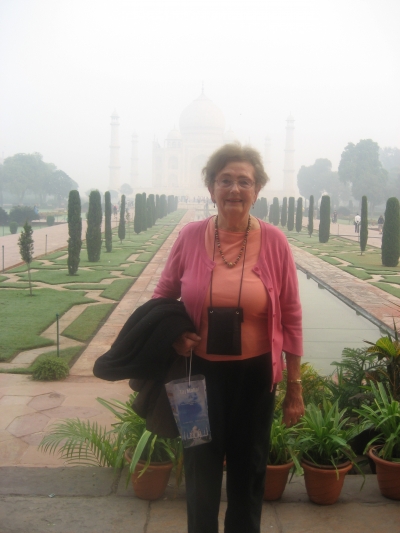 Sherri Auchard, a long time Peninsula resident, passed away peacefully on the afternoon of Tuesday, July 14th. She was attended by her family in her final hours, including her sister Jani, her son and daughter Evan and Melissa, her nephew Jeff Clarke and her granddaughter Melissa.

Mom was a fighter. Until the last few days, she was pushing herself to walk, reading her Bible, asserting her strict standards for bed-making with her caregivers and resisting pallitive medications, as she had for all her 85 yesrs.

Sherri was well loved by her family and many friends, travel buddies, bridge and domino partners and church congregation. Besides her faith in the Lord, she loved family, people, places, music and pets, in that order. Classical music formed the soundtrack of her life: She was a devoted aficionado of the San Francisco Opera and Symphony. She saw the world in countless trips to every continent except Antarctica. Her apartment was adorned with bric-a-brac, photos and art works from her travels.

She spent the past year battling interstitial lung disease that gave her increasing trouble with her lungs and heart. For her, the recent lockdown prevented her from visiting her many friends or getting out to shop or go to church but otherwise the pandemic was thankfully rather remote for her. She had enough going on, healthwise, to be sure.

Sharon Sides, always Sherri to anyone other than officialdom, was born in Los Angeles in 1934 to her parents, Grace, who would become a successful property investor, and Hollis, a surgeon at LA General Hospital who later became a cattle rancher in the Sierra foothills. She attended Los Angeles High School and then the University of California at Berkeley. She was a member of the Delta Delta Delta sorority at college.

While at Berkeley she became active in Christian youth groups, where she met her future husband, Lloyd Auchard, a Presbyterian pastor. They moved to Crockett, in the North Bay, where Lloyd headed his first church, while Sherri taught grade school. She gave birth to her sons Eric and Evan and daughter Melissa in rapid succession. They then moved to the Central Valley in the mid-1960s, where Lloyd was pastor at a church in Leemore and Sherri raised the kids.

In 1971, the family moved to the Mid-Peninsula, where Lloyd was the longtime pastor of Valley United Presbyterian Church in Portola Valley and Sherri began a series of counseling jobs that would define the rest of her career, after first taking a master’s degree at San Jose State University.

The Auchards lived in Menlo Park and were active in church and community. Each summer the family traveled in increasingly wider arcs across the West, the 48 States and Hawaii,. Mexico and Europe.

Lloyd and Sherri moved to Brussels in 1986, after the kids had left home. There they separated and divorced and Sherri returned to her home in Sharon Heights, where she lived until 2012.

For decades, she rented rooms to a succession of international students at Stanford, while remaining active in local churches including Menlo Park Presbyterian and, much later, Los Gatos Presbyterian Church. She devoted some of her travels to Christian charitable work in Africa and Eastern Europe.

From the late 1980’s, Sherri returned to work as a career counselor, and eventually set up a marriage and family therapy practice. She was also an active volunteer at Stanford Hospital, Filoli House in Woodside and other local institutions and a devoted fan of Stanford sports, the 49’ers and San Francisco Giants.

After semi-retirement, she moved down the Peninsula to a senior community at The Terraces in Los Gatos. She took part in the garden club and was an avid card and board game player. Sherri never stopped volunteering until her health caught up with her in the final year of her life.

Her former husband, Lloyd, passed away in 2019. Sherri is survived by her sister Jani Clarke of Merced, her son Eric Auchard in London, Evan Auchard in Woodacre, Calif. and Melissa Scholz of Madison, Wisconsin, as well as her five grandchildren, her nieces, nephews and in-laws, all of whom she cherished very much.

Photo Gallery
0 photos Upload a photo
Remembrances
0 entries Submit a remembrance
Memorial service
The plan is to hold a memorial service for Sherri as soon as is practical in the coming months for her community of friends. She will be laid to rest in a crypt she has chosen at Skylawn Memorial Park, along Skyline and overlooking the Pacific, as was her wish.
Make a donation
Gifts in her memory may be donated to the Los Gatos Presbyterian Church, with its many charitable programs, online at https://www.pclg.org/online-giving/ or mailed to 16575 Shannon Rd, Los Gatos, CA 95032.
About this site     Contact us