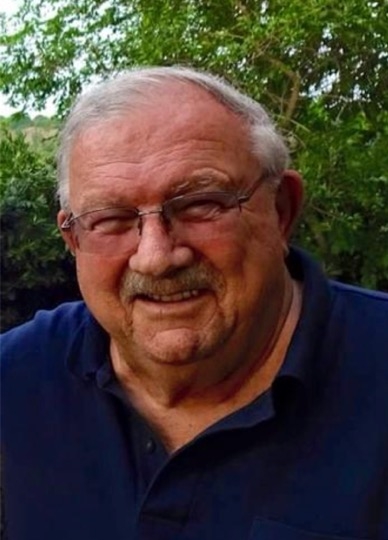 Thomas “Tom” Joseph Collins, of Palo Alto, CA, died at Mission Hospice in Redwood City on May 22, 2020, after a short illness. Tom was a terrific dad, grandfather, great-grandfather, uncle, and, most of all, husband—he sorely missed his wife Marge every day of the ten years since her death. Tom had a robust appetite for life, food, wine, and family, and he had friends across the country and the world. Tom had surely heard every possible “Tom Collins” joke and still reacted with humor every time someone joked about his name, even if he didn’t care for the drink. If you’re going to raise a glass to Tom Collins (which you should do), let it be Brunello or scotch!

Tom was born in 1934 to William “Bill” Collins and Ora Welte Collins, a German-Irish Catholic family, in the tiny farming town of Danbury, Iowa in the midst of the Great Depression. Tom’s dad owned the local Ford dealership; Tom learned to drive at an early age, which fostered a life-long love of cars, whether foreign, domestic, racing, or model. Tom started college at Creighton University in Omaha, but soon began to work at Beneficial Finance and to woo a certain Margery Theobald back in Mapleton, IA and Hammond, IN. Tom and Marge got married and had their only daughter, Ann Collins (Johns), in 1955. The Collins’ lived and worked in Hammond, Fort Wayne, and finally Indianapolis.

In 1965, Tom and family moved to Palo Alto, California, following in the footsteps of Tom’s parents and siblings, who had moved to Napa. Gone were the brutal winters and humid summers of the Midwest; in was the California life style, with weekend trips to San Francisco or the beach. Think “Mad Men”, with Tom and Marge as a happier version of the Drapers. Tom continued to work for Beneficial Finance in various managerial roles, in both San Francisco and the Peninsula. Tom, Marge, and Ann moved into their beloved Palo Alto home in 1968, where Tom lived until his death. Tom and Marge had busy work lives but loved to entertain, so the house was full of laughter and good times. But they didn’t give up on their midwestern roots, with annual summer trips to Iowa and, later in life, to Troy, MO, to visit Marge’s family Bill, Ellyn, and Bob Theobald. In later years, Tom often visited his nephew Jim Croxdale in Ames, IA.

As empty nesters after 1974, Tom and Marge traveled extensively, and in 1982, Tom finished his bachelors in finance at the University of San Francisco. Tom retired from Beneficial but continued to work in the mortgage business throughout the following decades. Tom and Marge made several spectacular trips in the 1980s and 1990s, including excursions to Africa, the Caribbean, New Zealand, Mexico, and Europe. Tom and Marge traveled to Italy several times with Ann and her family, and after Marge’s retirement, they traveled for nearly eight months in Europe, searching for ancestors and enjoying a peripatetic life style. That trip with Marge was one of the highlights of Tom’s life. Tom was a gifted and dedicated photographer, and he would return from these trips with hundreds of stunning images, many of which were displayed throughout their home.

Tom and Marge especially loved Yosemite; they returned to Yosemite throughout the years with Ann, other family members, and many friends. Tom and Marge, as “Pumpkin Productions” planned a decade-long series of Halloween parties at the Ahwahnee at Yosemite that were famous among their friends as being uproariously good times. Tom often dressed up as his beloved John Wayne.

Tom loved ocean fishing. He often fished out of San Francisco Bay, but in later years, Tom also fished in Alaska and Saskatchewan. Tom loved to play poker and belonged to a long-standing Palo Alto poker group; he loved the poker and his buddies, but he also loved the pie and ice cream at the end. Tom was involved in many Palo Alto volunteer community activities and political campaigns, but his biggest role was no doubt as Marge’s assistant in her many years of organizing school and civic events.

Tom and Marge loved the many dogs they had from the late 1980s on, especially those big galoots, the Gordon Setters. Tom would faithfully walk these silky giants throughout the neighborhood and to the dog park until his knees began to give him grief. Tom was an avid old movie fan, and he and those dogs would sit up through many a TCM movie marathon.

Tom and Marge’s daughter Ann moved from California in 1974, but they kept in close touch throughout her years at Bryn Mawr and in Austin, where she settled as a professor of art history at UT-Austin. After Marge’s death, Tom traveled yearly to Italy with Ann, and those weeks in Tuscany became a highlight of his year. Tom gained Hilary Johns as a son-in-law in 1986; grandsons Will in 1988 and Nick in 1991; granddaughter-in-law Emily in 2017; and great grandson Christopher in 2019. Everyone lives in Austin, so Tom had to trek down to Texas, which he loved for his family, the BBQ, and not much else (certainly not the heat).

Tom and Marge were fortunate to have another “daughter” in Renee Richards, their niece several times removed. Renee—just a few years younger than Ann—had midwestern roots but got to California as soon as she could, and she was truly as close to Tom and Marge as a daughter. Renee settled in San Francisco with her husband John and son James, working as an attorney, and she has always “been there” for Tom and Marge when it was difficult for Ann, including at the end of Tom’s life.

Tom leaves behind so many good friends in Palo Alto and beyond; Tom’s family is deeply grateful to all his friends for easing the pain of Marge’s death with their companionship and concern. Tom loved to have lunch with “the guys” and in later years, he enjoyed catching up with friends by shuttling them back and forth from the airport. With good friends, a wonderful neighborhood, and non-stop flights to Austin, Tom was able to live both well and independently until his death, a true milestone for any of us.

Tom’s death leaves us heartbroken, but he lived a good, long, and rich life. When it is safe to travel, his family will hold graveside services at Nishnabotna cemetery outside of Manilla, Iowa, where Marge is buried (https://www.ohdefuneralhome.com/obits). It’s a truly lovely spot. The family will also hold a reception in California to celebrate Tom’s life, at a later date. For donations in honor of Tom, we suggest the Yosemite foundation (https://yosemite.org/giving/gifts-in-memory-honor/); Gordon Setter Rescue of California (http://gordonsetter.rescueme.org/California); or a charity of your choice.

Photo Gallery
0 photos Upload a photo
Remembrances
1 entry Submit a remembrance
From Barbra Sheridan McGann
June 7, 2020
Tom was an absolute gem - one of the friendliest, thoughtful, and generous people I have ever known - and will always be teasured as such in our hearts. We are grateful for the opportunity to have known him and enjoyed time with him and Marge as we g...
Read more
Memorial service
Tom’s death leaves us heartbroken, but he lived a good, long, and rich life. When it is safe to travel, his family will hold graveside services at Nishnabotna cemetery outside of Manilla, Iowa, where Marge is buried (https://www.ohdefuneralhome.com/obits). It’s a truly lovely spot. The family will also hold a reception in California to celebrate Tom’s life, at a later date.
Make a donation
For donations in honor of Tom, we suggest the Yosemite foundation (https://yosemite.org/giving/gifts-in-memory-honor/); Gordon Setter Rescue of California (http://gordonsetter.rescueme.org/California); or a charity of your choice.
About this site     Contact us