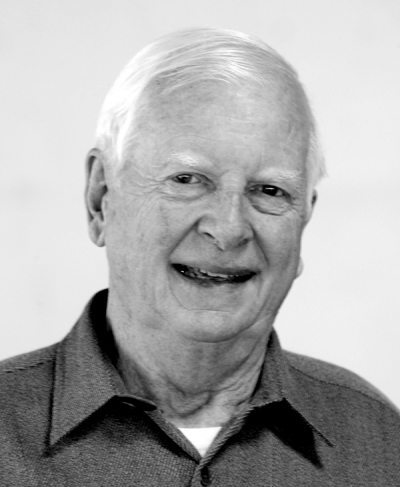 Tom Wyman, a longtime Palo Alto volunteer, died on March 17. He was 86. He became suddenly ill on the morning of March 10 and passed away from a brain aneurysm, his daughter, Susan, said.

Together with his wife, Ellen, he worked early on to protect Palo Alto's small-town feel. The couple fought against high-rise urbanization in the city, for example, when Palo Alto officials once planned to build a 19-story hospital on Bryant Street where the Avenidas Senior Center is today.

In 2005, he and his wife were honored with the Avenidas Lifetimes of Achievement award.

Wyman moved to Palo Alto in 1936 from a mining and moonshine hill-mining camp in Tennessee. When his father died, his mother moved the family to California, according to a biography by Annette Ashton (Glanckopf), Midtown Residents Association vice chair.

Wyman went on to study at San Jose State University for two years. He then joined the U.S. Navy and toured the Pacific. While there, his mother filled out forms for him to attend Stanford University, where he eventually studied mining engineering and geology.

He did stints in Eastern mines as a "powder monkey," a coal miner who brought cases of dynamite and fuses into areas of the mine to be detonated, he told the Palo Alto Weekly in 2005.

Life could be precarious, he soon discovered.

Wyman worked dirty jobs in the oil fields, learning the business from the bottom up, as a roustabout in Texas, and as a roughneck on drilling rigs -- an extremely dangerous job requiring exquisite coordination between rig workers.

Then he became an oil executive for Chevron, where he worked for 42 years. In those years, he often traveled the world.

He met Ellen in Chicago, and she ignited his passion for volunteering. The Wymans married in 1955 and moved to Bakersfield, Calif., for his job.

In 1960, they moved to the oilfields in Alaska, a state they loved, often taking in the wildlife and the aurora borealis. Less than two years later, Wyman was transferred to San Francisco.

The couple returned to Palo Alto in 1964 to raise a son and daughter. The city was at a cross-roads at that time, he recalled in 2005. The '50s had brought a new hospital at Stanford, Stanford Industrial Park and a chic shopping mall. An identity crisis loomed in Palo Alto -- whether to remain residential, or become a world-class metropolis. The community splintered between "establishment" and "residentialist," and the residentialists, which included the Wymans, eventually won.

The Wymans became active in the Friends of the Palo Alto Library in the 1990s. Tom Wyman's mother was involved in forming the Friends and was its membership chair, according to Glanckopf.

Wyman loved the city's libraries, and in the decades between the 1990s until the end of his life, he dedicated much of his time to enhancing them. He was especially proud of his work with Friends of Palo Alto Library book sales. When the couple started, the sale made about $1,000 a month. Under their supervision, it eventually garnered $100,000 annually.

In 1999, Wyman wrote a book, "Palo Alto and its Libraries, a Long Time Love Affair." That year, he and Ellen were instrumental in creating the city's library advisory commission. Wyman became its first chair.

He also crafted the first "New Library Plan," for Palo Alto, which the City Council adopted. The plan recommended building two resource libraries in addition to branches, but a bond measure to fund the new libraries failed, Glanckopf said.

Wyman fought for years to prevent the city's closure of branch libraries. In 2003, he fought against closing the downtown library to use it for library administrative offices. He was vigorously opposed to a 2004 proposal to close branch libraries in favor of one central library.

He probably was not re-appointed to the commission in 2005 by city council members because of his opposition, Bob Moss, a current commissioner, said.

"I was so saddened to hear that he had passed away. He was a wonderful person, He really had the city's best interests at heart for many, many, many years. He and Ellen were very effective in the Friends of the Palo Alto Libraries. (They) are two very remarkable and very unusual people," Moss said.

Wyman never lost his interest and concern for making things work effectively, Moss said. He worked hard on getting Mitchell Park Library improved. The renovated library is currently under construction.

Wyman also had a great passion for collecting slide rules. He collected them ever since he found a particularly elaborate set in a bombed-out shipping complex in Tokyo Bay during World War II.

His 60-year collection encompasses 700 to 800 slide rules, some dating back to the early 1600s, when the earliest slide rules appeared.

"There are more in the basement that I haven't told my wife about," he said during a 2008 interview.

Photo Gallery
0 photos Upload a photo
Remembrances
2 entries Submit a remembrance
From D. Dwayne Glass
March 31, 2014
This Universe / Our Ocean / This Earth / Our Strand / My Uncle Tom Wyman / A grain of Salt among the sands.
Memorial service
A memorial service will take place on April 18 at 11 a.m. at Lucie Stern Community Center Ballroom, 1305 Middlefield Road, Palo Alto. - See more at: www.paloaltoonline.com/news/2014/03/21/tom-wyman-library-commissioner-dies#sthash.5vr9zSZC.dpuf
About this site     Contact us