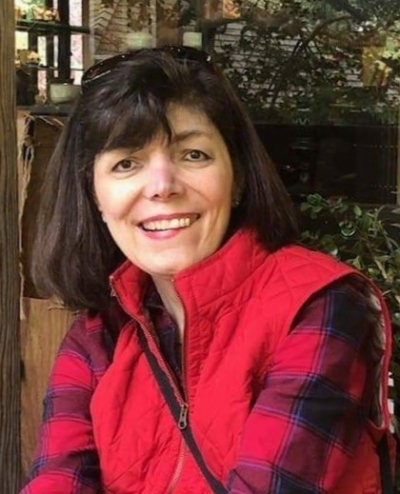 With her husband at her side, Gigi Noa passed away peacefully at Kaiser Hospital in Redwood City on August 6, 2020, after unexpectedly suffering a massive brain hemorrhage while tending her garden. She was 58.

Born at Stanford Hospital on October 6, 1961, Gigi was the youngest of four children to John and Virginia Gertridge. Growing up in Menlo Park, Gigi attended Encinal Elementary, Sacred Heart Prep High School (Atherton) and Independent Learning School. She graduated from Chico State University with a BA in Art History.

Gigi met the love of her life, Jorge Noa, at a friend’s wedding and they fell in love at first sight. Gigi and Jorge were married August 2, 1987, in the little chapel at Villa Maria Del Mar, Santa Cruz, near the Gertridge Family beach house on Sunny Cove. For the next 33 years, they made their home in the Twin Peaks neighborhood of San Francisco.

Gigi discovered her talent for etching and print making while taking art studio courses at Chico State and that passion stayed with her throughout all of her life. She deeply enjoyed expressing her creative urges and many of the etchings and aquatints hung in their Twin Peaks home were her own works. Her other great talent was baking delicious pies and caramel fudge cake. Though she could initially be perceived as shy, the outpouring of her spontaneous creativity and humor would delight everyone once she felt at ease. It was her uncomplaining enjoyment of life, her ability to recognize the inherent good in everyone and her disdain of being confrontational that formed her bond with her many lifelong friends.

It was these same qualities that allowed her to so successfully cope with an otherwise debilitating medical disorder that forced her to be a stay-at-home housewife. For the last 25 years of her life she suffered from a chronic disorder known as Interstitial Cystitis which currently has no cure and only marginal therapies for limited partial relief. She didn’t want the consequences of her medical condition to interfere with those around her. It is a testament to her optimism and enjoyment of life that only close friends and family were aware of her condition.

Gigi is survived by her husband Jorge, siblings Jay (Trish), Janet, Dick (Penny), and six nephews and nieces. She was predeceased by her parents Johnny & Ginny. Due to the limitations imposed by the Corona Virus pandemic, only a small private interment will be held at Los Gatos Memorial Park. In keeping with her lifelong efforts to always do personal good for others and help individuals in need, memorial contributions may be made to a charity of your choice.

Gigi will be greatly missed and very fondly remembered for the joy she brought with her and the caring she showed to those in need around her.