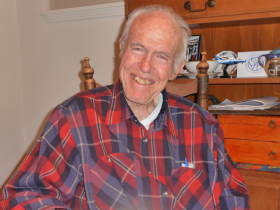 George Chippendale, age 93, passed away at Villa Siena in Mt. View on Sep 3, 2022 from complications due to Parkinson’s Disease.

He was born in Boston, MA to George R. Chippendale and Mary Estelle Armour Chippendale on Sep 28, 1928. George attended Boston Latin and MIT and met his lifetime companion, Ruth Blottman, while working at MIT. They married in 1955 in Attleboro, MA.

In 1957, the east coast couple relocated to Palo Alto, CA, where George enjoyed a long and fulfilling career as an aerospace engineer at Lockheed in Sunnyvale. An avid airplane enthusiast and pilot, he volunteered with Interplast (now ReSurge) during the 70’s and 80’s flying doctors and nurses to Mexico and Central America where the team repaired cleft lips and palates and performed plastic surgery on burn victims.

George was a long time volunteer with St. Vincent de Paul in East Palo Alto, managing the food closet, delivering food boxes, taking calls from those in need, and carrying out response interviews with clients in English and Spanish.

The Chippendale’s are forever thankful for the love and care of Villa Siena’s staff and community, the daughters of Charity, George’s amazing AccentCare hospice team, and Dr. Christopher Kwong who walked the extra miles with George.