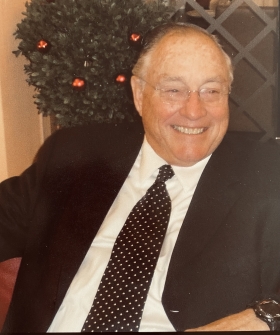 Harry Wilbur Rodda, a wonderful husband and father, a gifted architect, and great friend to all who knew him, passed away peacefully on Wednesday morning, December 23rd.

Born on November 18, 1937, he grew up in San Jose enjoying an adventurous childhood. He graduated from Lincoln High in 1955 where he played sports at a varsity level every year, beginning in the 10th grade. He was outstanding on the field, the court, and the diamond. He loved all sports his entire life.

Graduating in the class of 1959 from Stanford University, Harry belonged to Beta Theta Pi, studied architecture, played varsity baseball and, most of all, began his life-long avocation of forming and nurturing friendships. At his 50th Stanford reunion Harry listed his current mottos as “Cash is King, Pitching Wins, Best People In Best Places”.

Judith Ann Curb married Harry on June 27, 1959 in Whittier, CA. Harry’s talent in architecture was displayed in their exquisite Eichler home in Palo Alto where the Rodda Family resided for over 50 years. In 2010 Harry and Judie retired to The Forum at Rancho San Antonio, in Cupertino.

Harry was in the U.S. Navy and attended the Naval Officer Candidate School in Rhode Island. He went on to the Civil Engineering Corps in New Orleans and Strategic Air Command in Oklahoma. He retired as a Lt. Commander after twelve years in the Naval Reserve.

Beginning his architectural career with Aaron Green Associates in San Francisco he enjoyed the mentorship of Jack Howe, Frank Lloyd Wright’s long-time chief architect. It was here that Harry contributed to numerous projects such as the Marin County Hall of Justice and the Ohta house in Soquel. His colleagues at Aaron Green recall Harry’s creative and enthusiastic leadership.

In the early 70’s, Harry became a partner at Spencer Associates of Palo Alto where his work often involved designing facilities and visitor centers for the National Park Service. If you visit Mount St. Helens in Washington state, or Hoover Dam in Nevada, you will experience examples of his work. With The Promontory Partnership, he left his distinctive mark on museums and exhibition spaces throughout the West. In addition, he designed many striking and comfortable homes, often for friends.

A fountain of creativity, with pen and note pad always ready, Harry would sketch out ideas for anything -- a plan for a friend’s back-yard arbor, a diagram explaining the evolution of an idea, a map of an innovative garden, an illustration for a birthday card, all effortlessly and ambidextrously.

Harry’s family was his heartbeat. He adored them above all else. He always enjoyed the company of others. He inspired young minds around him by pointing out their personal strengths and cheering on their endeavors. He looked forward to a golf foursome, a mixed chorus, a men’s discussion group, and weekly poker. He was passionate about fly-fishing and was interested in astronomy, the arts, and had a lifelong love of history. Rounding out those interests was his love of music. Harry always had music playing, whether it be Italian opera, or John Denver, or even the two together. Harry was an enthusiast in the most wonderful sense. A Renaissance man that allowed him to connect with people from all walks of life. He was comfortable enjoying a game at the Sunken Diamond or sitting in a box at the Vienna Opera House.

Harry was an unforgettable influence in many lives and will be deeply missed.

Harry leaves Judie, his beloved wife of more than 60 years, and two cherished daughters and their families: Kristen (Mike) Olenick and son Zachary of Hailey, Idaho; and Megan Cox and her grown children, Mikala and Austin of Palo Alto.

Current circumstances prevent our gathering for a memorial in Harry’s honor. If you would like to recognize his memory, consider donating to a cause that enhances our experience of beauty, promotes an understanding of nature, or contributes to a peaceful future.