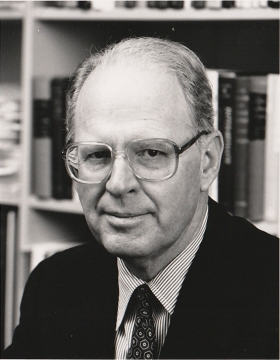 Jim was born in 1928 in Sterling, Colorado, to James and Lois (Brown) Howell. He graduated from high school in San Francisco and spent several years in the Armed Forces. He graduated in 1950 from Fresno State College, received a master’s degree from University of Illinois in 1951, and his doctorate in economics from Yale University in 1955. He joined the faculty at Stanford University’s Graduate School of Business in 1958, where he served for 60 years, teaching in the MBA program as well as directing the Stanford Executive Program. He was Director-General and Senior Research Fellow at the International Institute of Management Science in Berlin; National Science Foundation senior postdoctoral fellow at the London Business School; postdoctoral fellow at the London School of Economics; visiting professor at Harvard University, University of Hawaii, Stanford-in-Austria and -Berlin, and INSEAD (France); and staff at the Ford Foundation’s Program in Economic Development and Administration. He was the first recipient of the Robert T. Davis Faculty Award for lifetime achievement at the Stanford Business School. He maintained an active consultancy business and spoke at the World Economic Forum. Jim married Penny (Leinbach) in 1965, and they had one child, Caitlyn; he had three children from a previous marriage, Kenneth, William, and Jan. Jim and Penny enjoyed visits to all seven continents; their house in Santa Fe; salmon-fishing in British Columbia; opera performances; and the SF Giants. In his later years, Jim volunteered as a docent at the Fitzgerald Marine Reserve and took classes in quantum physics, archaeology, and genealogy. Jim is survived by his wife Penny; his children Kenneth (Luchia), William (Jennifer), Jan (Gavin), and Caitlyn (Chance); grandchildren Elizabeth, Sara, Nicholas, Angus, Evan, Collyn, and Calliope; brother-in-law Michael (Jennifer); former sister-in-law Susan; and niece Shannon (James). A celebration of life will be held later. In lieu of flowers, the family suggests donations to an educational foundation or organization of your choice.