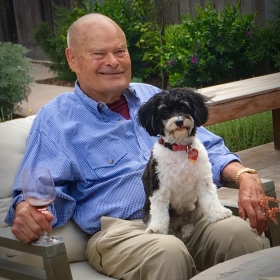 Our beloved patriarch, James Oliver Starr, born December 28, 1934, passed on May 7, 2020 after a brief struggle with pancreatic carcinoma. Jim was raised in Yosemite Valley and attended the Valley’s one-room school through the eighth grade – he moved to Fresno, California to complete his high school education. After graduating from UC Berkeley in 3 years, Jim trained in dentistry at the University of California, San Francisco. He met the love of his life, Pamela Starr, during summer break in Yosemite. They were married at the Yosemite Chapel in 1956 and remained inseparable. Besides his family, Jim’s other loves included skiing until he was 84 (he said his body “tingled” when skiing), cycling, sailing, travel, photography, and woodturning. His turned blocks of wood will adorn many homes and offices for centuries to come. Jim Starr’s dental career spanned 42 years, beginning in Hawaii when he was an Air Force Captain. In 1962, he moved to Palo Alto, where his career in private practice flourished. While he enjoyed working in the dental profession, he lived for his patients. Caring for generations of families was the lifeblood of Jim’s work, and his love of it was passed to his son Jeff and grandson Ryan (the fourth generation of dentists in the family) – both followed Jim into the family practice. Only one patient has experienced the dental skills of all four generations, our matriach, Pam Starr. Jim is survived by his wife of 64 years, Pam, his sons Jeff and wife Linda, Jon and wife Kelly, daughter Lisa, four grandchildren Ryan, Ashley, Serena, & Victoria, and one great granddaughter, Amelia. Jim Starr’s love of the high sierra and national parks in general can be recognized with a gift to the National Park Service (www.npca.org/give/memorial-tribute-giving). A family memorial service is planned in Wawona, Yosemite, where it all began.