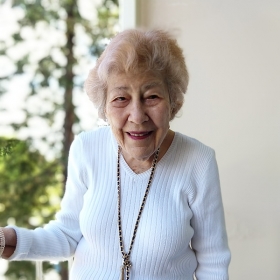 Judith Moss died on December 13, 2020 at the age of 96, shortly after a heart attack. She died peacefully at Stanford Hospital, surrounded virtually, via Zoom, by her adoring family. The private funeral will be conducted by Sinai Memorial Chapel on December 17.

Ms. Moss was the daughter of the late Louis and Bryna Moss of Brooklyn, New York, and the sister of the late Esther “Nicky” Jamieson (the late Norman) and the late Henry Moss (the late Barbara). She had six nephews: the oldest was the late Michael Jamieson (survived by his wife, Susan), who died in the spring of 2020, and she is survived by her other five nephews, J. Lawrence Jamieson (Ellen Gallo), Norman D. Jamieson, Philip B. Moss (Susan), Lawrence J. Moss (Lauren Class Schneider) and David C. Moss, along with various grand and great-grand nieces and nephews.

She lived for many years at the Channing House of Palo Alto, where she was active in governance and programming, serving as president of its Residents Association. She lived there until her death.

Ms. Moss completed her BA degree at Vassar College during World War II, and then was offered a job working on the development of computers at MIT; instead, she joined the Statistical Research Group, U.S. Navy. She later received an M.A. in Economics, and, very much later, in Computer Engineering from Stanford. She was a pioneer in the computer field, and saw its potential when few did, and faced and overcame many obstacles to advance her career in a male-dominated world.

After the War Judy worked at the Port of New York Authority, one of the first companies to get involved with computers. Eighty-five people applied for the job; she, the only woman applicant, got it. She left the Port Authority to work for Revlon and later for the City of Philadelphia, where she was active in setting up the first computer system. From there she went on to General Electric’s Computer Department, where she became Acting Manager of State and Local Government Sales (in those days, a woman could not be a manager, only an “acting” manager). In 1966 she moved to California to work in Lockheed’s information systems venture. Judy left Lockheed for a new career in educational administration at the San Francisco Community College District, and retired as interim vice-chancellor.

In the late 1960s, Ms. Moss became involved with local politics in Mountain View, California. In 1972, she became the first woman elected to the City Council, and later served as (its first woman) Mayor for two terms. After she retired, she remained active as a member of the Board of Trustees of Foothill-De Anza College. At the time, she said that the College kept her so busy that she had more time when she was working. She continued an active life of community volunteerism, including a term as president of the Palo Alto Jewish Community Center.

Judy had a keen intellect and a sharp sense of humor, both of which she retained until literally the last day of her life. Her nephews and other extended family members have many strong memories of Judy and will miss her greatly; each of her nephews believed himself to be her “favorite.” She was the last of her generation of the Moss family and the end of an era.