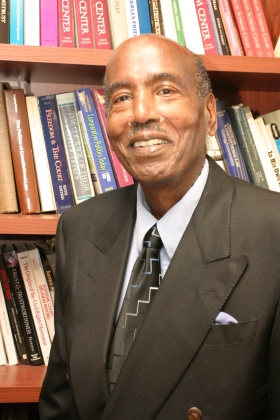 Lucius Jefferson Barker grew up in Louisiana decades before the civil rights movement during a time when "everything" was separate in the South, said his daughter Tracey Barker-Stevens. He was even discouraged (unsuccessfully) from trying to vote.

After attending segregated public schools and Black-only churches, Barker would go on to become a revered expert on race in American politics, mentoring Black political leaders and becoming part of many trailblazing moments along the path to breaking racial barriers: He was the second African American to be named president of the American Political Science Association, worked as a delegate for Jesse Jackson's 1984 presidential campaign, volunteered for Barack Obama's campaign and witnessed his inauguration as U.S. president in-person in 2009, and was appointed the William Bennett Munro Professor of Political Science, Emeritus, at Stanford University.

Barker died at his Menlo Park home on June 21 from complications due to Alzheimer's disease, Barker-Stevens confirmed. A virtual celebration of his life on July 11 brought together a wide circle of family, friends and colleagues — including former Secretary of State Condoleezza Rice, U.S. Sen. Cory Booker and Pastor Kaloma Smith of University AME Zion Church in Palo Alto, who all spoke in honor of him.

"He was a peer leader, of course … but he was so much more than his resume," said Rice, who maintained a lifelong friendship with Barker after meeting him in 1991. "Higher education for African Americans has been our holy grail. It's been our way out and our way up, and Lucius exemplified that. He was determined that that opportunity would be there for others."

Barker was born on June 11, 1928, in Franklinton, Louisiana, the fifth of six siblings. His father and mother were both educators at a time when schools were still segregated.

His lifelong passion for political science and teaching was ignited after taking an elective American politics class from professor Rodney Higgins while studying pre-med at Southern University and A&M College in Baton Rouge. He was so inspired by the class that he switched his major. In a 1991 interview, Barker credited Higgins as influential to his "intellectual development."

Barker earned his bachelor's degree in political science in 1949 and pursued his graduate studies at the University of Illinois at Urbana-Champaign, studying constitutional law and civil liberties. He launched his five-decade teaching career in the late 1950s after earning master's and doctorate degrees in political science. He went on to chair the political science department at Washington University in St. Louis until 1990, when he moved to the Sharon Heights neighborhood in Menlo Park to teach at Stanford.

His Stanford students included Sen. Booker, twin brothers and politicians Joaquin and Julian Castro and former U.S. Associate Attorney General Tony West. Barker also chaired the university's political science department. He retired as professor emeritus in 2006. "Professor Barker was more than a professor to me. He was a model and an inspiration," Booker told Stanford News Service. "He taught me the importance of rigorously pursuing knowledge, and using that knowledge in the service of others. And he lived this ethos, with a generosity of heart that nurtured, encouraged, and guided me toward a career of public service."

As an educator, Barker's friends and family said he emphasized student engagement and often employed the Socratic method of teaching, in which asking questions is an indispensable part of critical thinking.

"He would tell me all the time, when you ... start grilling (students), you can actually see the brain move," said Barker-Stevens.

Barker also delved deeper into politics when he became a delegate for Jesse Jackson, who led a formidable nationwide campaign for the Democratic presidential nomination in 1984. (Jackson eventually came out third for the nomination.) Barker chronicled his time as what he called an "open activist delegate" in his book, "Our Time Has Come."

Outside of his career in academia, Barker spent a lot of time with his wife, Maude, whom he married in 1965.

When they moved to Menlo Park, Barker and Maude opened their home to churchgoers, Stanford students and community members. During Obama's 2008 campaign, the couple offered space at their condominium complex for campaign volunteers to meet.

"They lived their lives with a circle wide open, and Barker brought people in," said Jim Vanides, an education consultant and longtime friend of Barker.

Barker also helped set up a scholarship fund through the Baton Rouge Area Foundation. Barker-Stevens runs the fund as president alongside her sister Heidi.

"He had a biblical scripture: 'To whom much is given, much is required,'" Barker-Stevens said. "And that was what we lived by."

Barker was predeceased by his wife, Maude, who died on May 19, and his five siblings. He is survived by his two daughters, Tracey Barker-Stevens and Heidi Barker; and two grandsons.