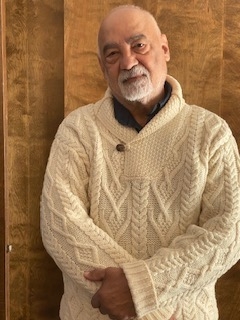 Robert Rosado died peacefully on September 12, 2020 at his home in Davis, with his family surrounding him. The cause was a rare and aggressive form of bladder cancer. Along with his wife, Judith, and son Adam, he lived for many years in Mountain View before moving to Davis in 2014.

Robert was one of eight children born to Lydia and Miguel Rosado in Ponce, Puerto Rico on December 24th, 1943. His birth name was Roberto Rosado-Cuascut. Early in his life he moved with his family to New York City, where 2 brothers and a sister still live. Another sister lives in Virginia.

As a teenager he joined the Marines and served in Vietnam. Returning to San Juan, PR after military service, Robert lived there for many years and completed college.

Working as a real estate agent in Santurce, PR, he charmed his future wife Judith Healy when he rented her an apartment there in 1986. It was destiny that they met. They spent very little time away from each other since then and were married for 33 years.

Robert was proud of his Puerto Rican heritage. He was a great salsa dancer and an even better cook. He created many enjoyable meals for friends and family. One of his specialties was Paella, and every one of his birthday meals included home made Pasteles and the dish of root vegetables known as Vianda. In 1995 he wrote a cookbook, along with his wife, titled" Recipes from La Isla-New & Traditional Puerto Rican Cuisine."

Robert was a good neighbor, and a friend to many. He is already deeply missed by those close to him. Along with his siblings, he is survived by his wife Judith, and by sons Aaron of Lancaster, OH and Adam, of Davis, CA. He is also survived by a grandson, Abram, born to Aaron and his wife April. He leaves his beloved Bulldog, Bugsy, in the care of family. No memorial services are planned at this time.