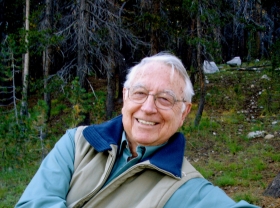 Russell B. Bryan, age 98, died of Covid-19 in Belmont, California, on December 23, 2020. Born in Santa Monica CA in 1922, he earned degrees in physics from Stanford University (A.B. 1943) and Harvard University (M.A. 1948, Ph.D. 1951). He also served in the United States Navy during World War II, honorably discharged as a lieutenant. After working as a physicist at Dartmouth College, the University of Cambridge (England), and U.C. Berkeley, he changed course. He ran twice for Congress in California’s 10th District, then launched into a life of extensive travel from his home base in Palo Alto and Menlo Park.

An avid hiker and reader, his endeavors also included painting and photography. He loved good food and cooked with imagination and flair. He was an enthusiastic member of the Stanford University community, enjoying music, film, and especially the libraries. He retained a life-long love of physics, taking every Quantum Mechanics class offered to the community, several times over. But his primary passion was for classical music, especially piano and opera, which enlivened all his years.

His friends knew him as a raconteur, kind and modest, with an incisive mind, a quick wit, and a delightful laugh. He loved his daughters and their families dearly, and treasured family gatherings both large and small.

A virtual memorial service will be offered over Zoom on Sunday, January 17, at 1:00 Pacific Time; those who wish to attend can click on https://forms.gle/RTeJ4EGF9aNuBVJY6 to obtain the link. An in-person celebration of his life will be held when we may safely gather. Donations in his memory may be made to the Sempervirens Fund, 419 South San Antonio Rd., Suite 211, Los Altos, CA 94022; or to the Russell B. Bryan Memorial Fund at Stanford University, care of Gift Processing, Office of Development, 326 Galvez Street, Stanford, CA 94305.