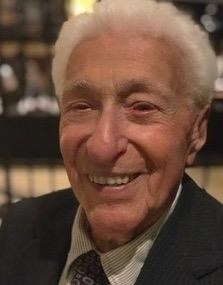 Walter E. Jaye - formerly Walter Jakubowski – passed away November 9 at his home in Menlo Park. He was born in Berlin, Germany in 1925 and was a Holocaust survivor. He became a French citizen and was a decorated veteran, being awarded the Legion d’Honneur in 2015 for military service in WW II. He came to the United States on a student fellowship and earned his BS in Electrical Engineering with Honors in 1951 from the University of Rhode Island and his MS in EE from Stanford University in 1952. He was naturalized as a US citizen in 1959.

As a teenager he escaped a French internment camp and was sheltered from the Nazis in the French village of Le Chambon sur Lignon, a community made famous by the willingness of the local population to risk their own lives to shelter Jews and other refugees. Both of his parents were deported from France and died at Auschwitz. He ultimately escaped occupied France with the help of the French resistance and went on to serve in the Second Armored Division of the Free French Army, the famous Dèuxime “DB” that liberated Paris and Strasbourg.

He was proud of his long work at SRI International although he could only share details of his work there long after retirement, when his efforts were declassified. With the advent of Sputnik he became involved in the tracking of satellites and missiles with the 60-foot radar in the Stanford foothills (the “Dish”). A major portion of his work involved contracts with a number of different Intelligence Agencies.

He is preceded in death by his much-loved sister Ruth.

A true gentleman with both depth of character, and lightness of spirit. He and his loving wife Diana were the perfect couple, supporting each other in every way. He will be sorely missed.

Walter and Diana are neighbors. We would visit with Walter almost daily as he walked his beloved dog Kirby. Walter would greet us with a big smile on his face and a sparkle in his eyes. He was modest about his own extraordinary life, but always interested in hearing about ours. He was an outstanding host at his own home, making all his guests feel special. He was the special one, and we miss him.

I feel so fortunate to have known this kind man while working at SRI for ten years. He was so generous with people less fortunate than him. He let a colleague of ours, Martha Thomson stay at one his rentals for free for many years until she passed. We spoke a few words of French together. His warm smile will always be part of my fond memories of him.

We will miss seeing him walk the dog daily in the neighborhood. Always such a gentleman.

A wonderful man. I'm honored to have known him.

I worked with Walter during our Trees for Menlo project. A wonderful, warm person and always with the great smile. It was a privilege to know him.