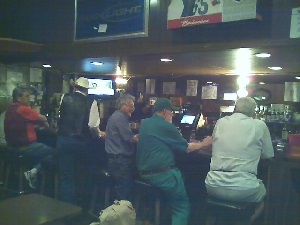 KW is a registered user.


Seriously bummed. Only place in MV where you could go out for a drink and not have to mortgage your house. Music was kept quiet so you could actually hold a conversation.

Report Objectionable Content
Email Town Square Moderator
Posted by MyOpinion
a resident of Sylvan Park
on Jul 5, 2014 at 9:00 am

MyOpinion is a registered user.


This is great news, the new and improved Mervyns sounds like it will be a nice addition to Castro Street.

For those who want cheap drinks, they can always join the Eagles on Castro St, best deal in town for drinks and the profits support their charities.

Mervyn's Lounge (behind 236 Castro), downtown MV's venerable low-profile neighborhood bar-lounge and the oldest bar of any kind in the city, has posted a note on its alley door, announcing open hours Tuesday through Sunday, 6 PM to 2 AM, closed Mondays, and that this schedule is "subject to change," any changes to be updated on the door. Note the reduced hours: for many years, Mervyn's had opened in the mornings, and seven days a week.

In another development that, to my knowledge, is entirely independent (and may well be temporary), today the city's Building Inspection Division posted Stop-Work orders on the doors of the restaurant in front at 236 Castro, citing inadequate permits. The restaurant has been undergoing remodeling, toward reopening with the its old Mervyn's name restored.


I confirmed this with one of the owners and one of the bartenders yesterday: there's no intention of changing Mervyn's Lounge, let alone closing such a popular local institution.

The people who'd held the Lounge business as a concession within the restaurant property are no longer involved, but the family that owns the restaurant (and whose bar license the Lounge has always operated under) are rehiring old bartenders, toward new permanent hours of 11 AM to 2 AM daily once it's fully staffed. For now, Mervyn's Lounge opens 6PM and is closed Mondays (the Monday closure may continue). The owner I talked to pledged a hands-off approach, only routine clean-up planned, no change to the look and feel. Regulars are coming back in.

Why the owner of Burlingame's Rasa gave up a Michelin star
By The Peninsula Foodist | 0 comments | 1,859 views