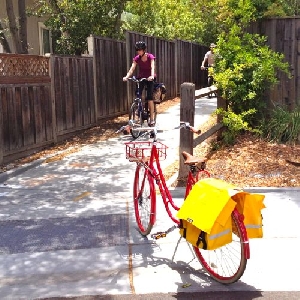 I've found the Google Maps bicycling directions to be very reliable for finding quiet bike routes around Silicon Valley. It is much more complete than the official city or county bike maps.

Report Objectionable Content
Email Town Square Moderator
Posted by Janet Lafleur
a resident of Rex Manor
on May 30, 2013 at 12:29 pm


@commuter I use Google Maps a lot, especially with the Street View to get a look at streets I think might be an issue. I wish they offered bike maps/directions for mobile phones, though. I'm often already on the road when I need to look something up.

Report Objectionable Content
Email Town Square Moderator
Posted by commuter
a resident of another community
on May 30, 2013 at 1:04 pm

Google Maps bicycle directions works really great on my Android smartphone. I frequently use it to create or change my routes on the fly or just to see where a certain road or bike path leads. Since Android is a local product, it understandably works especially well in Mountain View.

Unfortunately, the map programs on some other brands of phones have very dubious reputations :)

Report Objectionable Content
Email Town Square Moderator
Posted by Janet Lafleur
a resident of Rex Manor
on May 30, 2013 at 1:21 pm

Report Objectionable Content
Email Town Square Moderator
Posted by Roight
a resident of Old Mountain View
on May 30, 2013 at 2:17 pm

I LOVE being able to scoot through a bike passageway and around an otherwise 5-10 minute ride around. I hate it when I'm in my car and I know there's a secret path cut-through. Maybe I just need a super skinny car :)

Report Objectionable Content
Email Town Square Moderator
Posted by Janet Lafleur
a resident of Rex Manor
on May 30, 2013 at 4:37 pm


@Roight There are definitely some routes that are faster by bike with the secret passageways than in a car. Going from Palo Alto's Town & Country to University Ave is so much faster via the Homer tunnel than driving around.

What's the status of the easement between Leland Ave and Towne Cir.? I remember some time ago there was a hubbub about the condo complex locking the gate. Is that still the case?


@Greg I think the gate is probably still locked. About six months ago Dick and I tried to use it from the Leland Avenue side but it was locked.

I don't know much about the history, but it would be great to have a connection from downtown to the San Antonio Caltrain station that doesn't require riding on California St.


@Pedal your fish Thanks! If you like ice cream you'll find this Thursday's story a real treat...

Report Objectionable Content
Email Town Square Moderator
Posted by Fou du vélo
a resident of another community
on Jun 5, 2013 at 11:15 am

Report Objectionable Content
Email Town Square Moderator
Posted by Janet Lafleur
a resident of Rex Manor
on Jun 5, 2013 at 11:58 am


@Fou du vélo I wish I could point you to some low-stress ways to cross El Camino, but as you know they don't exist. :(

There are only a handful of streets and roads that cross El Camino and most have speed limits higher than 30 mph and multiple lanes of car traffic. Many people on bikes end up crossing like a pedestrian to avoid mixing it up with the high volume of faster traffic.

Dick and I usually cross at Castro, Escuela/El Monte, or Calderon. We ride in the regular traffic lane to cross, but we are on alert the whole time. It's not fun.

Do you have any suggestions for the MV city transportation committee to improve crossing El Camino on bikes?

Report Objectionable Content
Email Town Square Moderator
Posted by resident
a resident of another community
on Jun 5, 2013 at 12:20 pm

Los Altos has nice bike lanes on San Antonio Road, but last time I checked those ended at the Mountain View border, so biking to the San Antonio Shopping Center or San Antonio Caltrain station were essentially impossible. I hope that the San Antonio corridor is high on the city's priority list, because right now it has to be the worst part of town for bicyclists.


@resident Yes, it's very unfortunate that the bike lanes on San Antonio Road in Los Altos do not extend across El Camino into Mountain View. It definitely makes biking to San Antonio Center more stressful to have to share a regular traffic lane with cars or awkward to have to cross like a pedestrian.

Altough I've heard it discussed, I don't think there's a timeline for adding bike lanes there. I recommend writing the MV City Council and telling them that bike lanes on San Antonio are critical. Email address is citycouncil at mountainview.gov

re: crossing El Camino, ideally I'd like the City to look at ped/bike overpasses/underpasses. In the meantime, bike lanes should be enlarged and much better marked at each intersection (Palo Alto has a few good examples of great lane markings). Also the City should ensure bike lane continuity on each side of El Camino. Resident mentioned San Antonio, the same issue exists between Shoreline and Miramonte (the bike lane disappears as you cross El Camino into Miramonte). re: Escuela/El Monte, it's one of the ways I cross El Camino; it might make sense to put a bike lane on El Camino between Escuela and El Monte.


@Fou du vélo I think you should send your concerns and suggestions to city council too. Under and overpasses are not likely to happen anytime soon, but road markings may be possible. I definitely suggest being specific about the intersections you've seen that work in Palo Alto.

Report Objectionable Content
Email Town Square Moderator
Posted by resident
a resident of another community
on Jun 5, 2013 at 2:43 pm

Some nice Palo Alto bike routes across El Camino are:
1. Sand Hill Road - bikes have their own signal cycle to cross El Camino; cars are not allowed to cross here

2. Serra Street - traffic calming on the Palo Alto side of El Camino reduces traffic speeds on one of the major bicycle routes into Stanford University

3. Stanford Ave - intersection was recently updated to improve bicycle and pedestrian safety. Car parking was removed for 100 feet in all directions to give bikes more space and improve visibility.

4. Matadero Ave - little used by cars, but proposed as a bicycle boulevard to connect neighborhoods and major bike routes on both sides of El Camino

Here's another example of clear bike lane markings through an intersection in Palo Alto @ Channing.

I Was At The Stanford Shooting. Let’s Do Better Next Time
By Laura Stec | 2 comments | 2,841 views

Some of the best jobs around
By Sherry Listgarten | 4 comments | 1,952 views