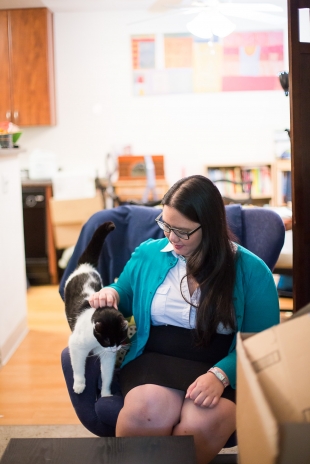 Rental Housing Committee member Emily Ramos pets her roommate's cat Mariposa in their apartment on April 17. She was the only renter originally slated to be on the board to oversee rent control, but a last-minute change of heart by some council members put renter Evan Ortiz on the committee. Photo by Michelle Le

After months of evaluating candidates, the Mountain View City Council on Tuesday formally appointed members to its Rental Housing Committee, a largely independent panel that will take on the complex job of administering citywide rent control.

Selecting committee members has been a divisive issue for council members, and the April 18 meeting was no different. The appointments squeezed through by a thin 4-3 margin after the council majority made a last-minute change to their committee picks made at a previous meeting.

Councilman Chris Clark said he was open to changing the five committee members, and one extra alternate, to provide more balance.

"I still have some reservations with the makeup and balance, and I just want to register that," he said. "I appreciate the process we went through, but the mix is not ideal."

The late change drew an angry reaction from a trio of council members who opposed Ortiz joining the committee.

"We spent an incredible amount of time going over this ... to change this now on the dais really troubles me," said Councilwoman Margaret Abe-Koga.

But a thin majority on the council threw their support behind the late change. In a series of 4-3 votes, the council appointed Ramos, Means, Grunewald, Honey and Ortiz to four-year terms on the committee, with Pardo de Zela as the alternate. Means and Ortiz were selected to serve the shorter, two-year terms.

The Rental Housing Committee is expected to convene its first meeting in May, when it will appoint committee officers and begin establishing rules for enforcing the Measure V rent control program.

Hmmm? The committee is stacked to oppose rent control. PERIOD.

Unfortunately, this whole thing is getting crazier by the minute. Agree that there was probably never a plan for rent control in the first place -- just pipe dreams to go with the marijuana. The landlords should be allowed to set their own rates, and the tenants should have the rights to leave if it does not suit them. There is nothing positive about it.

Most tenants pay rent on or shortly after the first of each month. The TRO went away on April 4. Will the rent due May 1st include a prorata reduction for April? What if not? And what if the landlord does not even lower the May rent as required?

Posted by Name hidden
a resident of Whisman Station

Can you stay healthy without making more trash?
By Sherry Listgarten | 7 comments | 3,409 views

Think about helping others in our coronavirus-affected area
By Diana Diamond | 7 comments | 3,090 views

The University of California’s flexible policies during COVID-19
By John Raftrey and Lori McCormick | 6 comments | 1,824 views