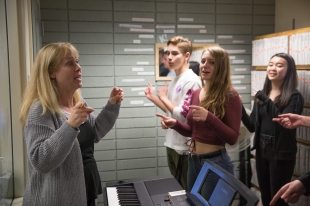 As part of the negotiations to sell the land near Alta Vista to MVLA, the city needs to pay attention to one of its priority items from the 2014 Parks and Open Space Plan: "Explore the possibility of developing an agreement with the Mountain View Los Altos High School District for joint use of open space for public use at Mountain View High School."

John is a registered user.


The district's campaign mailer reports that enrollent has increased only about 100 students per year for the last six years. Soaring enrollment is always a good story. A good one - but not true. Maybe when Mountain View finishes adding 10,000 more housing units in the Whisman side of town, enrollment will increase (at least in private schools)!

Rather than saddling all home owners with this additional entry on our tax bills, assess the builders for the construction. Then it is baked into the price of the new house.
Have previous school bond issues been paid off?

Report Objectionable Content
Email Town Square Moderator
11 people like this
Posted by Meg
a resident of Shoreline West
on Feb 5, 2018 at 8:56 pm

No more taxes! The so called tax cut is ripping off homeowners in our State already. I will not support paying any more taxes!!

Report Objectionable Content
Email Town Square Moderator
3 people like this
Posted by Steven Nelson
a resident of Cuesta Park
on Feb 6, 2018 at 4:02 pm

@Robyn - Existing school bond taxes (K-12) in the Mountain View Whisman School District area are already higher than in the Palo Alto UNIFIED School District, according to a recent article in the Los Altos Town Crier. This happens when you add the current MVWSD + MVLA property taxes together. It is also 'even higher' in the area of the old Whisman School District, where their bonds, guaranteed by their properties, must pay off a higher rate than the old Mountain View District. [ there was MVWSD Bond wording to pay that debt down, but the 2013-17 MVWSD board majority was always more interested in 'new large' buildings at the two middle school sites than tax equalization between the two parts of the elementary district ]. These taxes phase out, in stages, over the next 30 years.

Report Objectionable Content
Email Town Square Moderator
3 people like this
Posted by Steven Nelson
a resident of Cuesta Park
on Feb 6, 2018 at 4:19 pm

@ Robyn The MVLA existing bond property tax obligation (Measure A 2010) will be paid off sometime in the next 20 years.

There was an extremely interesting Calif. school facilities bond / residential property value micro-economics study done in the last decade. Although there was absolutely no statistically significant ACADEMIC effect seen in districts that barely passed a bond tax, there was a statistically significant jump in residential property VALUES compared to similar districts that did NOT pass a bond tax. The authors attributed it to "a signaling variable" effect - This Community Really Values their schools! !!

Report Objectionable Content
Email Town Square Moderator
8 people like this
Posted by Jphn
a resident of Sylvan Park
on Feb 6, 2018 at 10:07 pm

Jphn is a registered user.


Such an appropriate picture to go along with the story. The school board scrutinized the proposal like choir members question the words of a song: not at all. Why not another $295 million for the November ballot? Call that one: "second verse, same as the first."

Report Objectionable Content
Email Town Square Moderator
14 people like this
Posted by No More Taxes
a resident of Shoreline West
on Feb 7, 2018 at 7:34 am

And especially until the city puts an end to the swelling RV problem.

I don't care if they are separate entities.

Report Objectionable Content
Email Town Square Moderator
7 people like this
Posted by More Taxes
a resident of another community
on Feb 7, 2018 at 1:49 pm

Keep in mind that the elementary school districts are both talking about extra bond measures of their own. I don't see smart planning on the part of the high school district to make the cost reasonable. The population growth is not happening NOW, but in the future.

The worst example of this is in LASD. There is an actual reduction in student population going on there, which will impact the high school district too. They are proposing to waste $150 Million of bond money that they have sat on for 3 years. They would spend this to buy more land and add an 8th elementary school. This is absurd, because of how much land they already have. They are talking about added students, but in reality they have seen a shrinkage over time. Families with kids aren't moving into LASD territory as much as they once did. All of their elementary schools are seeing enrollment declines. To make it worst, they need to move 6th grade to their middle school sites like most school districts. When they do this, it will reduce the enrollment at the existing 7 elementary schools still further. Some are 300 or 400 now, and they will become 250 or 330. That's just too small to be affordable. They don't need another site. They don't have enough kids to fill up and operate the sites they already have!

All these taxes hit the property tax bills. LASD's is going to have to float the new bond measure because the last one will only pay for the land, and not cover all the needed construction. The taxpayers will start paying off the first $150 Million around the time MVLA bond will hit the bills too. Then LASD is going to float yet another bond. This all needs to be coordinated!