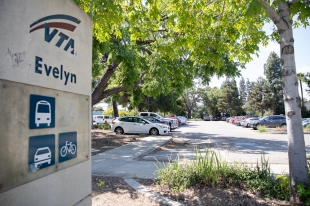 Mountain View officials struck a deal to lease the VTA parking lot for the old Evelyn light rail stop, at the corner of Evelyn Avenue and Pioneer Way, with plans to use it as a safe parking site for vehicle dwellers and eventually, an affordable housing project. Photo by Magali Gauthier

City of Mountain View officials on Tuesday signed a deal to lease and eventually buy an unused property from the Valley Transportation Authority to provide safe parking for homeless residents. The 2-acre parcel, formerly a parking lot for the Evelyn light rail station, is expected to be built out with about 180 apartments over the coming years.

Under the deal approved by the City Council in a 6-0 vote, Mountain View will pay VTA $11 million to lease the site for the next 65 years. Councilman John McAlister recused himself from the vote due to his role on the VTA board of directors.

Long before the lease expires, Mountain View city officials say they intend to buy the land for an undetermined price. By the time that sale happens, the city expects to have formal proposals from third-party developers for how the property can be best built out with housing.

The property, at the corner of Evelyn Avenue and Pioneer Way, was a transit park-and-ride lot, but it hasn't seen much use since the Evelyn light rail station closed in 2015.

Plans to develop the site have been in the works for nearly three years as officials from the two government agencies slowly negotiated over the best usage. The property is currently zoned for industrial uses, which would need to be modified to allow a housing development.

VTA officials say they were willing to heavily discount the property because Mountain View shared a mutual interest in building housing. On top of the $11 million lease price, the city also agreed to pay $2 million to retain its exclusive option to purchase the site. City officials say they could be ready to buy the land within the next 18 months.

"Mountain View, to its credit, has been active in affordable housing development to meet the needs of low-income households, and this is consistent with what the city has done," said Ron Golem, VTA's real estate director. "The big picture for us is we're excited to partner on the project."

Similar plans are also moving forward for transit-oriented housing near major VTA rail stops in San Jose, including a 570-unit apartment project near the Tamien station and about 300 apartments near the Blossom Hill station.

It remains to be seen how much housing can fit on the 2-acre Evelyn Avenue site. At a minimum, city density rules would require 150 housing units, but it is expected to contain much more. When built, the units are expected to go to households earning under 120 percent of the area median income.

Mountain View officials noted multiple incentives for securing ownership of the land. By acquiring it, the city could keep the housing affordable in perpetuity. Plus, the city would also have full control over the development process and balancing community input.

Another bonus in securing the land is the promise of a new location for a temporary safe parking lot. Earlier this year, city officials estimated the VTA lot could house about 20 vehicles. The city currently has space for just eight small-size vehicles, but that safe-parking capacity will jump to about 20 in the coming weeks when a new Terra Bella lot opens.

Finding suitable safe parking sites has been an urgent priority ever since the council voted in March to prohibit large vehicles from parking on the street. There are nearly 300 inhabited vehicles on Mountain View's streets, and about two-thirds of those are large RVs or trailers that will be restricted in the coming months. City Property Manager Dennis Drennan estimated the site would be ready for safe parking by early fall.

However, there were already early signs that a safe parking lot could face resistance in the North Whisman neighborhood. Echoing the concerns of other property owners, Sunnyvale Foreign Car Service owner Matthew Pataky urged the city not to warehouse the city's homeless population near his business.

"I'm generally concerned about the safe parking concept. To me, it sounds like anyone can sleep in their car," he said. "For me, I have a lot of hiring clients that drop off expensive cars right there, and people are going to be going to bathroom in the bushes and trees."

City officials have not discussed any specific plans for amenities such as bathroom facilities, lighting and security. City Manager Dan Rich emphasized that the land acquisition was only the first step in a lengthy process.

Good work by the city. All of us in the community benefit from more affordable housing and safe parking for people who currently live in their vehicle.

9 people like this
Posted by Mountain View Resident
a resident of Waverly Park
on May 9, 2019 at 5:32 pm

This lot is used by commuters and is close to full M-F during business hours.

The following statement excerpted from article is simply not true.
Does anyone ever verify what they write anymore?

The property, at the corner of Evelyn Avenue and Pioneer Way, was a transit park-and-ride lot, but it hasn't seen much use since the Evelyn light rail station closed in 2015.

Why are we paying millions of dollars to lease land from VTA when Mtn View already owns plenty of land that has been sitting vacant for DECADES on Cuesta Drive. Lets put the Cuesta Park Annex to good use ... turn it into an RV park. Charge reasonable RENT, $1000 to $1500 per month, and provide the necessary services. Get the RVs off the street. It will pay for itself. Gee, what a thought.

Report Objectionable Content
Email Town Square Moderator
10 people like this
Posted by MVFlyer
a resident of Monta Loma
on May 9, 2019 at 6:49 pm

RoxieK...the reason why they won't use the lot at Cuesta..NIMBY.

Report Objectionable Content
Email Town Square Moderator
30 people like this
Posted by Peter
a resident of Cuesta Park
on May 9, 2019 at 7:06 pm

RoxieK and MVFlyer, how about giving the RVs a spot outside your house, or on your driveway, um, perhaps NIMBY, too? (I’m afraid there’s a little NIMBY in all of us.)

Report Objectionable Content
Email Town Square Moderator
12 people like this
Posted by RonTT
a resident of North Whisman
on May 9, 2019 at 7:17 pm

Don't make it hard on your neighbors or your city. This is an option if you have lots of homes or if there is no drive that is right for your truck. And keep in mind that if you are buying a trailer, you still want the most fuel efficient trailer available.

Report Objectionable Content
Email Town Square Moderator
18 people like this
Posted by Commenter
a resident of Monta Loma
on May 9, 2019 at 10:05 pm

Are commenters really proposing turning city parks into RV parks? Take away open space and jam it full of people?

Report Objectionable Content
Email Town Square Moderator
6 people like this
Posted by RonTT
a resident of North Whisman
on May 9, 2019 at 10:31 pm

There are some good reasons for those who are proposing this, including the fact that RV parks are usually rented by city agencies. While they may not be available year round, those in favor of parks turning into RV parks have a few ways to mitigate that.

One approach is to require city or county agencies to apply for a zoning exemption, which, by law, only applies to the "parking and recreation" part of the zoning. RV parks would get their zoning exemption the first year they become available and stay there for 30 years.

Report Objectionable Content
Email Town Square Moderator
5 people like this
Posted by Kling-Kling Bird
a resident of Another Mountain View Neighborhood
on May 10, 2019 at 1:53 pm

Kling-Kling Bird is a registered user.


The quotation from Mr. Pataky is not correct. He did not say he had "hiring clients." He said he had "high-rank clients." This was quoted correctly in Thursday's Palo Alto Daily Post. Is the Mountain View Voice too embarrassed to report on the same level of conceit that Palo Alto takes for granted?

Report Objectionable Content
Email Town Square Moderator
16 people like this
Posted by OK
a resident of Sylvan Park
on May 10, 2019 at 2:55 pm

OK is a registered user.


Stupid idea and waste of money. $11 million to park couple of dozen RVs close to the city downtown - are you kidding me?

Report Objectionable Content
Email Town Square Moderator
10 people like this
Posted by RonTT
a resident of North Whisman
on May 10, 2019 at 5:38 pm

RonTT is a registered user.


This would be an amazing resource to help with building the streetscape there. It should not be just an office block or residential zone.


My question is about the idea that people should move here and park their cars at these places. I don't know if a lot of people would move here and there isn't really a lot of commercial traffic, but there are still people walking and biking and the bike racks are often in places. In other words it's easy to get into an urban wasteland and it's hard to create a vibrant and productive urban environment. People need to move north, south, east, west, etc.

Report Objectionable Content
Email Town Square Moderator
2 people like this
Posted by For your dogs to poop in...
a resident of Another Mountain View Neighborhood
on May 16, 2019 at 9:46 pm

For your dogs to poop in... is a registered user.


The Cuesta Annex isn't empty land, it's a city park and a leash free area for dogs.

BTW, the neighboring Cuesta Park isn't a leash free area except a small portion of it, despite ignorant dog owners who let their dogs run free in the rest of Cuesta Park.

The city isn't overwatering the grass for dogs to poop in, you have the Annex for that.

The first few seconds after awakening; before I remember the virus
By Chandrama Anderson | 0 comments | 3,163 views

Can you stay healthy without making more trash?
By Sherry Listgarten | 4 comments | 2,547 views

Think about helping others in our coronavirus-affected area
By Diana Diamond | 6 comments | 2,373 views