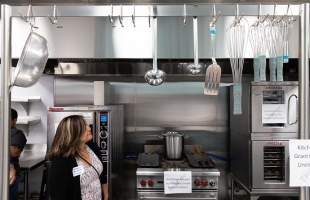 Councilwoman Margaret Abe-Koga walks through the newly renovated kitchen at Trinity United Methodist Church on May 15, 2019. Photo by Magali Gauthier

Then why dosent Google allow RVs in there parking lot . They pay money to home less programs get a big tax write off but wont allow them on there property . Kinda two faced to me how many of these RVs are Google employees . The city has had years to deal with this problem and have failed they wont even allow RVs on city property but flood our streets with RVs .
.

Anne Le Ziblatt, formerly of Tamarine and Bong Su, is back with a Vietnamese noodle bar in Redwood City
By Elena Kadvany | 7 comments | 3,217 views