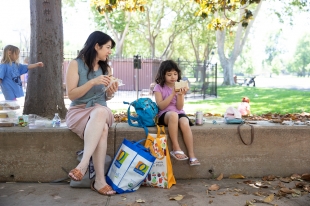 It is good to read articles like this. Local government helping children in need. But it also shows the county can afford to give teachers a salary boost.

"When you've got a food truck, people come," she said”.
Yeah, no kidding. It’s free food for anybody that shows up. A non-discriminatory handout at the taxpayers expense. It seems that if families were truly hungry they’d show up to the places that are currently serving meals. The school district is running out of money to operate the schools but somehow we can afford to feed everybody in MV that wants free food.

Excellent idea! I hope children of other Bay Area city's and counties take advantage of this. Social media is our friend to notify those needing a free meal to join us in Mt. View!

Report Objectionable Content
Email Town Square Moderator
13 people like this
Posted by Diana Olivares
a resident of Rengstorff Park
on Jun 20, 2019 at 7:39 am

This is an excellent project help to feed kids and seniors in need.
Kids are our future and we need to invest in them. It is ironic that in one if the most richest places in the World we have kids starving and parent not knowing how to feed them everyday.
Stop complaining about feeding the hungers. Step out of your bubble and learns about the needs our community has.
"We believe that a mobile food truck will increase the district's ability to reach some of the hardest-to-reach children and families this summer, a time when child hunger peaks,"

Report Objectionable Content
Email Town Square Moderator
9 people like this
Posted by Jim
a resident of Old Mountain View
on Jun 20, 2019 at 7:49 am