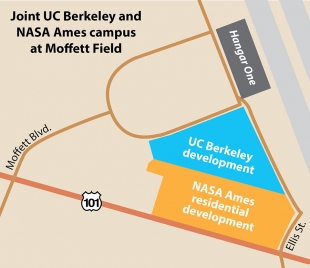 UC Berkeley and NASA Ames are planning a new research park at Moffett Field with up to 1.3 million square feet of offices and research and development labs, adjacent to a planned housing development for federal workers.

Why is Lenny Siegel being cited in this piece? Who cares what he thinks? If he had his way this UC Berkeley plan would make Moffett more like Berkeley by drawing in even more homeless people and eliminating sensible parking requirements.

Ok I get it Berkeley wants to do research with the NASA. But didn’t the CA legislature already approve a UC Expansion campus for MV?

Mountain View residents should vote to decide if we want Mountain View becomes another Berkeley, a progressive and liberal community in foreseeable future.

GS is a registered user.


Who is Lenny Siegel??? What significance does he have whether it gets built or not?

To Lenny's question of where the 4000 are going to live.. There is still plenty of curb space available and cops who are instructed not to enforce the law. Your precedent, Lenny.

Report Objectionable Content
Email Town Square Moderator
8 people like this
Posted by SRB
a resident of St. Francis Acres
on Aug 2, 2019 at 1:07 pm

SRB is a registered user.


On top of the housing demand generated by these developments, there probably won't be any property tax collected since it's on federal land. Can the City at least collect development impact fees ? Or will this be an all pain/no gain development for Mountain View?