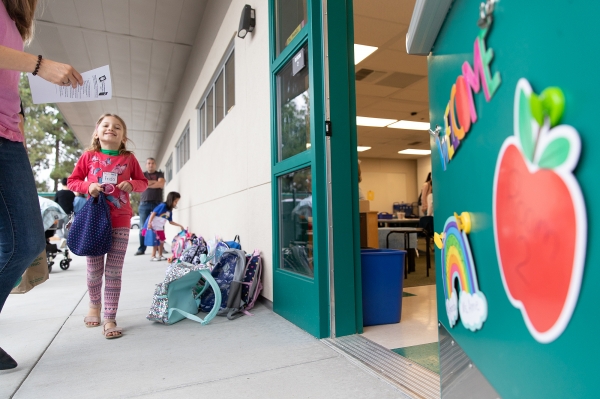 Frida, 5, walks into her kindergarten classroom with a big smile on her face on the first day at Jose Antonio Vargas Elementary School, the Mountain View Whisman School District's new school, on Aug. 19, 2019. Photo by Magali Gauthier 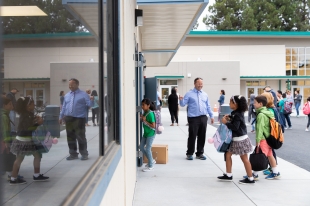 Greg Coladonato is a registered user.


Thank you for this very nice coverage of this momentous day, Kevin. I was pleased to read that so many families walked to school. That's a big change from before, when the vast majority of the kids in those neighborhoods needed to be driven to school, sometimes several miles away.

What a peaceful first day in Vargas! My kids were well attended and teachers are really nice! We LOVE Vargas!

AParent is a registered user.


Does anyone know the situation with water at the school?

I understand they forgot to install drinking fountains (a repeat of Stevenson's), but why can the kids not refill bottles from the on class sinks?

The school never should have been opened. It's still an active construction site. Did any one see a Board Member, our illustrious superintendent, or any of his district office cronies on the new campus today? Where were they hiding? Is there any word when electrical power will be supplied to the school? What's all this about no drinking fountains?

Report Objectionable Content
Email Town Square Moderator
21 people like this
Posted by FeelingBasForTeachers
a resident of Rex Manor
on Aug 19, 2019 at 7:19 pm

FeelingBasForTeachers is a registered user.


@Standing Ovation
I agree entirely. Most of the teachers were working both Saturday and Sunday (with no power) and not a Bord member or Superintendent anywhere around.

The poor teachers at Vargas are being shafted and ignored by the district.

- Working without power (meaning no AC) on the weekend
- No drinkable water
- Minimal supplies - not much furniture or rugs
- YMCA isn't certified, so Kinder teachers have to give up their prep time
- 5th grade teachers have to share classroom with YMCA and then move at some point in the year
- Large classes: 30+

It's just a mess.

Report Objectionable Content
Email Town Square Moderator
29 people like this
Posted by so sad
a resident of Castro City
on Aug 19, 2019 at 8:03 pm

I feel so bad for the entire Vargas community, students, parents, teachers and staff.
However I’m not surprised that the district being run by a inexperienced superintendent who keeps making costly blunders and yet the school board still stands back and applauds his work and even rewards it with huge raises while in the the same breath let staff go due to budget cuts.
When is enough enough?
Teach to One forced on staff and community.
Firing experienced administrators and hiring friends.
Friend who took the money worked for a year before Vargas was opened and quit suddenly padding his own retirement pockets before taking a tech job.
Loosing money, laying off staff and then finding the money.
Tearing apart the dual immersion program.
The learning gap has not shrunk....and yet he continues to get praise at a job well done.
Stevenson no hot water.
Now no electricity for Vargas.....once again the buck for all of these things stops at Dr. Rudolph
Stand up, stand for the students, do something

Report Objectionable Content
Email Town Square Moderator
7 people like this
Posted by Gary
a resident of Sylvan Park
on Aug 19, 2019 at 8:13 pm


Yeah but the glass was half-full - at least for the opening day.

Report Objectionable Content
Email Town Square Moderator
36 people like this
Posted by Jaime
a resident of Whisman Station
on Aug 19, 2019 at 8:40 pm

As a parent of children who now attend Vargas, we are THRILLED with the new school. Will there be growing pains? There sure will, but that’s to be expected. I encourage the readers of this article to not get wrapped up in the negative comments from those who do not have first-hand knowledge of the situation there. I normally don’t like to “feed the trolls” but I can tell you that I was personally on campus with my family last Saturday, helping teachers move into their classrooms. The lights and the A/C were on, so no... they weren’t sitting there in the dark trying to organize their classrooms. And yes, I saw Dr. Ayinde on the blacktop, breaking down cardboard boxes and helping other community members fill a giant truck full of it as new furniture was brought in. Not that his whereabouts on the weekend need to be justified, but it bothers me that there are false accusations from a few people trolling this article and breeding negativity. This community will thrive with positivity, people! If you don’t like something, then BE the change. Lend a helping hand, offer to do something, offer to use your personal resources to HELP, rather than to sit behind your computers and spew negativity. Now is the time to come together, not to sit back and point fingers because that’s not productive. Let’s work together to make this the best school ever. Go Golden Owls!!

Report Objectionable Content
Email Town Square Moderator
6 people like this
Posted by Nick
a resident of Cuesta Park
on Aug 19, 2019 at 9:06 pm

[Portion removed due to disrespectful comment or offensive language]

Report Objectionable Content
Email Town Square Moderator
8 people like this
Posted by WhatsInAName
a resident of Old Mountain View
on Aug 20, 2019 at 3:52 am

Well, "Grace Hopper" would have been a better name, since she was a one of the mothers of Computer Science, and also an Admiral in the Navy (and hence would pull in Moffet Field as well).

But, luckily for Vargas, he gets two schools named after him to assuage the liberal guilt around being in the US with Trump and his policies.

Let's just hope he doesn't have a #metoo moment in the next 50 years. Luckily, he's not much of a public figure, so it's unlikely anyone will notice if he does.


Agreed, WhatsInAName. Instead of choosing a school naming tribute that would have been a very unifying symbol of the area, like a Grace Hopper, they instead opted for a ridiculous political statement. Heck, at least name the school after Alberto Vargas. That dude could paint.

Report Objectionable Content
Email Town Square Moderator
2 people like this
Posted by Old Steve
a resident of Rex Manor
on Aug 27, 2019 at 4:01 pm

Old Steve is a registered user.


Admiral Grace Hopper certainly deserves the different named honors the Navy has seen to. Did she ever work at Moffett? Vargas is a former Mountain View resident and public school student. Is there something wrong with his Pulitzer? Vargas has been to the school, and is a relatively young person who relates well with elementary kids and their parents. The district did run a naming exercise in the community, Vargas was not imposed by the district.

Maybe some folks have other issues with the Vargas name about which they are not transparent. I certainly do not, and I am proud of Vargas and all our students.

'Are they ready for fully innovative Indian food?' Ettan arrives in Palo Alto with chaat, caviar and a secret menu
By Elena Kadvany | 0 comments | 3,655 views

Flying: How to lower your impact
By Sherry Listgarten | 12 comments | 2,600 views