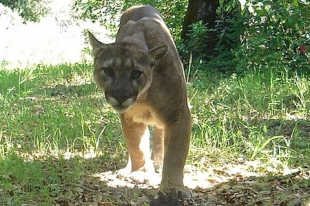 A mountain lion and her three cubs have caused the closure of Rancho San Antonio on Aug. 23. Photo courtesy of MROSD/Ken Hickman

Dan Waylonis is a registered user.

4 people like this
Posted by Interesting....
a resident of Another Mountain View Neighborhood
on Aug 23, 2019 at 3:26 pm

Report Objectionable Content
Email Town Square Moderator
6 people like this
Posted by parent
a resident of Old Mountain View
on Aug 23, 2019 at 3:44 pm


Four posts and all of them removed? What gives? I’ve never seen Dan break the rules.

'Are they ready for fully innovative Indian food?' Ettan arrives in Palo Alto with chaat, caviar and a secret menu
By Elena Kadvany | 0 comments | 3,636 views

Flying: How to lower your impact
By Sherry Listgarten | 12 comments | 2,598 views