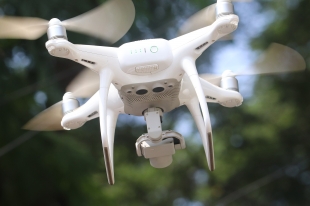 The Mountain View City Council approved a policy for using drones for city business, from police manhunts to building inspections. The policy aims to preserve privacy rights for residents. Courtesy of TheSachuHopes via Wiki Commons

The Mountain View City Council was quick to embrace a new policy Tuesday allowing city employees to use drones, saying the technology could be used in tasks ranging from tracking down criminal suspects to inspecting gutters.

The 7-0 vote puts in place guidelines for using Unmanned Aircraft Systems (UAS), better known as drones, to conduct city business. The Mountain View Police Department, which led the effort, has called the technology a valuable way to gain a better vantage point in numerous situations, whether searching for lost people, assisting in an investigation or responding to a suspected explosive device.

Drones equipped with thermal imaging and a high-resolution camera can also be useful in fighting fires, according to a city staff report, able to peer through smoky plumes to put out hot spots. The city's public works department is also seeking to use drones for building inspections and observing hard-to-reach spots like roofs and gutters.

The Mountain View City Council agreed in April to pursue a policy and clear the way for city staff to use drones, but not before conducting public outreach to address concerns from the public. Council members at the time had reservations about privacy and sought limits on when and where drones could be deployed.

Councilwoman Margaret Abe-Koga called the policy a "good start" for a new technology, and said that she was ready to pass it as is.

"I think we should go ahead and move forward with this," she said. "There's always room for changes if needed."

The policy states that city staff must use drones in a way that doesn't run afoul of California's trespassing laws, which prohibit audio and video recording of people in private settings in a manner that is "offensive to a reasonable person." Drone pilots must also take "reasonable precautions" to avoid inadvertently recording images that violate someone's privacy, such as modifying the flight route or considering when to stop recording.

"Operators will avoid flying UAS over private property to the extent possible, unless necessary for the protection of life and property, with consent of the owner, or in compliance with lawful access," according to the policy.

Police Lt. Saul Jaeger told council members that the policy is aligned with guidelines established by the American Civil Liberties Union, and that privacy is an integral part of the drone program.

"The protection of individual civil rights and the reasonable expectation of privacy remain key components of any decision to deploy UAS," he said.

Despite the unanimous vote, some council members had misgivings about the new technology. Councilwoman Alison Hicks said members of the public have raised concerns that the privacy protections may not go far enough, and that there is a potential for "mission creep." She said she wanted to see a cap on the number of drones that would prevent the city from reaching a large number of them buzzing around the city.

Councilman Lucas Ramirez said he was comfortable with city employees using drones, but worried that the policy opens the door for the city to enlist third-party contractors to pilot drones to conduct city business that may not be beholden to the city's restrictions. City Manager Dan Rich said that anyone doing work on behalf of the city would have to adhere to the policy.

The police department revealed it is planning to purchase two drones, one "general purpose" drone and a smaller one. The fire department is also planning to acquire a drone through a joint grant with the San Jose Fire Department.

Public Works Director Mike Fuller said at the Sept. 3 council meeting that his department is taking things slowly, and expects to initially borrow the police department's drone before requesting to buy one at a future date.

Police spokeswoman Katie Nelson told the Voice after the council meeting that there is no specific timeline for buying the drones, and that the department plans to be "meticulous" in deciding which model is best suited for the job. She said the department is also planning to build a team of personnel that can use the drones in accordance with the city's new policy, which will involve piloting licenses and hours of training.

Similar to police body camera footage, drone video recordings will generally be retained for two years, longer if it's needed as evidence in court. Redactions will be made to any recordings that are requested through the California Public Records Act, though specific decisions -- like whether to blur the face of someone who appears in a video -- will have to be made by the city attorney's office on a case-by-case basis, said City Attorney Krishan Chopra.

Interesting there's no mention of adhering to FAA rules and regulations. Which there are plenty.

And if this is considered "commercial" use, which I think it is, there are even more rules. Anyone flying the drones have to pass tests. Notifications of airports etc.

2 people like this
Posted by Also
a resident of Another Mountain View Neighborhood
on Sep 5, 2019 at 2:40 pm

They'll also need the times you'll be in the shower, just for security reasons.

Report Objectionable Content
Email Town Square Moderator
4 people like this
Posted by Citizen
a resident of The Crossings
on Sep 5, 2019 at 2:52 pm

Report Objectionable Content
Email Town Square Moderator
3 people like this
Posted by Ben
a resident of Old Mountain View
on Sep 6, 2019 at 9:32 am

Why does the city not have a surveillance technology ordinance like so many other cities and our own county?

Report Objectionable Content
Email Town Square Moderator
7 people like this
Posted by V. Putin
a resident of another community
on Sep 8, 2019 at 11:48 am

Drones in every American neighborhood. Love it. We will all obey FAA regulations religiously. I swear.

Can you stay healthy without making more trash?
By Sherry Listgarten | 7 comments | 3,390 views

Think about helping others in our coronavirus-affected area
By Diana Diamond | 7 comments | 3,073 views

The University of California’s flexible policies during COVID-19
By John Raftrey and Lori McCormick | 6 comments | 1,785 views