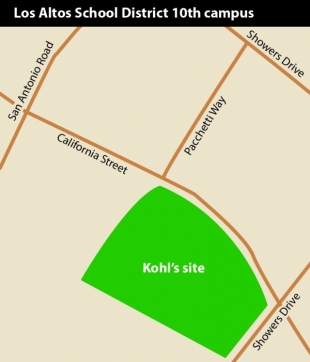 
The Mountain View City Council ended up proposing this odd and burdensome method of subsidizing a school district in exchange for binding land-use restrictions - including that the school NOT be a charter school unless the charter school gives priority in enrollment to neighborhood school-age children. Bullis will not offer that priority. However, deals can be re-negotiated. The LASD and others that still want to use the site to get Bullis out of Los Altos may look for Mountain View City Council candidates who will support such a switch-a-roo. Candidates will need to be at least asked about their position. And, of course, not all politicians answer truthfully.

The use of the site ought not be that controversial. The relocation of Egan was a genius idea, but the board has stirred up such opposition by the wait presented the idea that it is unlikely. The board is not very effective at getting good solutions. It lucked into having this land given to it. A neighborhood elementary school is needed and really the only choice.

For years the board claimed kids in that area are all low income and the school would be hurt by having such poor kids in the school. I don't agree with that argument. It's actually ludicrous and offensive and absurdly patronizing. However, the fact is the area is too large to all go to a single elementary school. Forecasts have the area fairly quickly growing from last years' 800 total students to 1000. That means about 800 will live there in grades K-6 by the time any new school opened.

The truth is the bad service at present is more pronounced on that side of San Antonio. On the other side of San Antonio the kids go to the closest elementary school existing, Santa Rita. So simply leave the intact. If the new school serves an area only on its own side of San Antonio, it's about the ride size of a school, i.e. LASD standards of 500 to 600 students in one K-6 school. This brings kids back home from where they new travel, 3 miles away to Covington to 2 miles away to Almond. Combine those 2 tiny areas of LASD and it makes a workable new school size, one that meets the neighborhood need as well as the city council's directions.

It's worth noting that the student population in Los Altos has been dropping off and will continue to do so. Right now Santa Rita is already more than 50% serving the Mountain View area. This is the 2nd largest LASD elementary school to serve Mountain View behind Springer. In 5 more years, Santa Rita will be more like 60% composed to Mountain View kids, and the district as a whole will be as much as 1/3 comprised of Mountain View residents. Facts help.

This will be an insanely EXPENSIVE school. Total price tag: $240 million.

1. LASD is paying $30 million for land and $90 million to build a school.
2. Mountain View is paying $43 million
3. The residents of MV/LA/PA are paying by putting up with a 7-story monstrosity that that will cause traffic problems. We are also paying because there will be less housing and less retail because of this project. Let's estimate this "price" we are paying at $80 million since that's what developers are paying to build more densely.

Is the school needed? Absolutely not if you are talking about acreage. There's plenty of land in Los Altos to accommodate the growth anticipated in the San Antonio/El Camino area.

If you are looking to give the residents of San Antonio/El Camino a neighborhood school that they can WALK to, then the school is needed. But is that LASD's plan? NOPE. Look at @Gary's post above. He and other LASD-proponents think it's "burdensome" that a school located in MV should serve its neighborhood students.

What makes more sense to them is to use the $240 million school to fight its long-standing war against Bullis. Bullis has made clear that 10th site doesn't make any sense because it's too far for most of its students, and it's too small for them.

Of course, the fact they don't want it is PRECISELY why LASD wants them to have it.

$240 MILLION is a huge price tag to pay to fund LASD's vendetta against Bullis.

The residents of MV/LA/PA need to fight back against this horrible plan.

"Kenyon said the agreement brokered with Federal Realty allows the commercial tenants on the school's portion of the shopping center to stay for three years, during which time the school district will be collecting about $2.5 million in annual rents. Though that income is entirely unrestricted, Kenyon said he is recommending to the board that the rent money go straight into the district's capital fund."
There we have it. Randy Kenyon's final words for 2019. Unrestricted income of 2.5 million per year. Why give that up and build a school? It will be much more lucrative and exciting for the district to just let the tenants sit and simmer for 6 years, 10 years, and so on and collect rent each year. Extend the agreement with Federal Realty. Don't worry BCS. Moving day is far, far away and you can continue to grow, grow, grow. MVCC will have to wait for their neighborhood school. I'll be glad that Kohls and 24 Hour can sit and simmer too! Meanwhile, the costs to build a school will go up, up, up! Can't wait to pass more bonds to fix the 9 schools and dump the income from rent into salaries.

Report Objectionable Content
Email Town Square Moderator
2 people like this
Posted by @Gary
a resident of The Crossings
on Dec 24, 2019 at 8:22 pm

Are you and your school buddies too entitled to send your LASD kids to the 10th site? What is it with you people on the Los Altos side of El Camino who think this site is on the other side of the tracks?[Portion removed due to disrespectful comment or offensive language]
Shame on you for advocating for segregation.

Report Objectionable Content
Email Town Square Moderator
1 person likes this
Posted by J
a resident of another community
on Dec 24, 2019 at 8:57 pm

Does anyone want to talk about why Bullis Charter gave preferential treatment to LAH residents for years but won’t giver enrollment preference to the North El Camino area?

Blame LASD all you want for wanting to balance their schools. What about BCS trying to keep “the poor kids” out of their school by refusing to give everyone equal chances of gaining enrollment.

Report Objectionable Content
Email Town Square Moderator
6 people like this
Posted by Gary
a resident of Sylvan Park
on Dec 24, 2019 at 9:03 pm


As to the post above directed @Gary, I am not a Los Altos resident and did not advocate anything in my post (first above), although I have written about getting a neighborhood school at any 10th site instead of Bullis Charter. As to the prior post above, interesting that the LASD is looking to raise spending money renting out school sites. The MV-Whisman District has 3 school sites leased out long-term for CASH: Whisman, Slater and Cooper. School district employees - starting with administrators - are most concerned about school district employees. Students come and go.

Report Objectionable Content
Email Town Square Moderator
6 people like this
Posted by Fed Up Parent
a resident of another community
on Dec 24, 2019 at 9:27 pm

MV City Council will soon learn that LASD is an entity that does NOT deal fairly.

Obviously, they are doing this so that the MV residents in LASD can get a neighborhood school. But, as you can see from posts by LASD-proponents like @Gary and @J, LASD is not interested in serving MV students. Instead, the "thanks" that MV will get for its $123 million contribution is:

1. publicity efforts to get MV councilmembers (who oppose them) un-elected
2. more traffic to the new school because it will be serving Bullis, 80% of whom live in Los Altos (so they will be driving).

LASD trustees specialize in negative public stunts against parties they don't like. They have accused Bullis of discrimination with close to zero evidence and have encouraged protests by LASD families against Bullis families.

They have also very aggressively accused Santa Clara County of failing in its oversight job with zero evidence (while cc'ing many lawmakers in Sacramento).

MV City Council members - you are next.

Report Objectionable Content
Email Town Square Moderator
8 people like this
Posted by Gary
a resident of Sylvan Park
on Dec 24, 2019 at 9:29 pm


Last year, the LASD had a majority of the MV City Council ready to fund the 10th site with city "transferable development rights" and not prohibit use of the site by the LASD to exile Bullis Charter. Among that City Council majority was John McAlister who had unlawfully failed to disclose on his city statements of economic interests that had was a major co-owner of a small corporation operating day-care at Covington School under a lease from the LASD. After McAlister was reported, he eventually recused himself - leaving the scheme to exile Bullis a vote short. A MV councilmember, Margaret Abe-Koga, signed up for a LASD advisory group and recommended that the potential 10th site on California Avenue in MV be used for Egan. That may be its best use. But LASD operatives likely have another plan - about which I warn in my opening post.

Flying: How much is enough? It's personal.
By Sherry Listgarten | 8 comments | 2,002 views