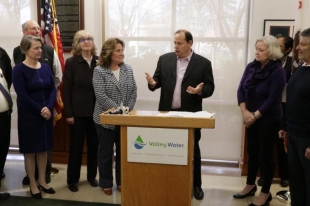 Santa Clara Valley Water District board member Gary Kremen lauds the new deal between the district and the cities of Palo Alto and Mountain View after the board's Dec. 10 vote to approve the agreement. Photo courtesy Valley Water.

Hailing it as a "historic" agreement, Santa Clara County's primary water supplier, Valley Water, enthusiastically approved on Dec. 10 a 76-year deal with Palo and Mountain View to construct a water purification plant in the Baylands with the intent of greatly expanding use of recycled water.

Under the approved terms, Valley Water would pay $16 million for a water purification plant that would be built near the Regional Water Quality Control Plant in the Palo Alto Baylands. The facility, which has an estimated price tag of $20 million, will reduce salinity in treated wastewater and allow more commercial customers to hook up to the city's "purple pipes."

The cities and Valley Water are also looking at potentially building a larger and more advanced purification facility in the future, possibly in Palo Alto. That regional plant would effectively convert wastewater to potable water.

But while the water district and the two cities lauded the deal as a perfect example of agencies working together for a common good, the agreement leaves open one critical question: Where exactly would the regional plant be located? The answer to that question may rest with Palo Alto voters.

City officials have proposed using a 10-acre site at Byxbee Park that was initially designated as parkland but that voters "undedicated" in 2011 when they approved Measure E. That measure made the site available for a waste-to-energy facility such as an anaerobic digestion plant. Since the vote, however, the city has agreed to ship out its sewage sludge for treatment in Merced County and Fairfield facilities rather than build a local plant.

The measure requires a public vote for any use of the site beyond what was approved in 2011. It also specifies, however, that the "undedication" is only valid for 10 years. After that time, the council will have the option of dedicating it as parkland.

The contract between the three agencies specifies that if Valley Water determines that the Measure E site is the best location for a regional plant, and no "extenuating circumstances" have been identified by the city, Palo Alto staff will recommend that the City Council place a measure on the ballot to allow for this use. It would then be up to local voters to either advance or push back against the regional plan. If Valley Water opts not to move ahead with a water plant Palo Alto, the contract allows it to convey effluent to another location in the county for treatment.

Walter Hays, a local environmentalist who was one of the leading proponents of Measure E, said he supports changing the rules for the 10-acre site to allow the construction of a water treatment plant. At the Dec. 10 meeting of Valley Water board of directors, Hays said he and other supporters of the measure would be happy to work on a voter initiative to authorize the purification plant.

Hays said that in the years since Measure E, he and others learned that it was "more practical" to ship out sewage sludge and have it treated through anaerobic digestion elsewhere.

"So that site is available now for other environmental purposes and those of us who worked on anaerobic digestion would love to see the advanced treatment plant there," Hays told the Valley Water board.

A report from Palo Alto's Utilities Department suggests that not everyone shares this view. The city hosted a meeting in April to discuss the partnership with the Valley Water. While many community members supported the goals of reducing the city's reliance on imported water and enhancing water conservation, they also "expressed concern with the use of the Measure E site for a Valley Water regional purification facility," the report states.

Despite this unresolved issue, Valley Water's board unanimously supported the deal, which Palo Alto and Mountain View had approved on Nov. 18. The contract also allows the water district to transfer half of Palo Alto's treated wastewater to an "advanced water purification center," which could be built either in the city or elsewhere in the county. The plant would convert wastewater to potable water.

Board member Tony Estremera, who made the motion to approve the agreement, lauded staff from the two cities and the water district for confronting and overcoming the various obstacles that stood in the way of the agreement.

His colleagues agreed. Board member Gary Kremen, who represents north county, said it's been an "honor" to work on the deal, while board member Barbara Keegan said she hopes to see other cities forge similar agreements with Valley Water in the years to come.

"I look forward someday to be able to say nice things about the city of San Jose and city of Santa Clara, when we enter into similar partnerships with them," Keegan said. "But they will not have that special place that the communities of Palo Alto and Mountain View have of being the first to the table, so to speak."

The deal also gives Palo Alto the option of buying water from the water district. Today, the city is one of about two dozen that buy their water from the San Francisco Public Utilities Commission, which relies on the Hetch Hetchy system.

Elected leaders from Palo Alto and Mountain View similarly lauded the effort. Palo Alto Mayor Eric Filseth said in a statement that the partnership will "increase the resiliency of our vital water supply." Mountain View Mayor Lisa Matichak said the deal will improve the quality of recycled water in Mountain View and Palo Alto.

Pat on the Stevens Creek Trail is a registered user.


I was very pleased to attend the signing ceremony. Advanced treatment of our wastewater is a great way to produce recycled water that is drought resistant. It will also allow the recycled water to be much better quality than our current recycled supply. Congratulations to all who worked on this. I certainly hope our neighbors in Palo Alto will allow the Measure E site to be used.

Like this comment
Posted by MV council watcher
a resident of Another Mountain View Neighborhood
on Dec 31, 2019 at 11:33 am

Thank you former councilwoman! (guess) This is the type of civic project that informed local legislators both support and help negotiate to get done. - Plural possessive of cities, I don't think is "city's" -

I’m not thrilled. Years of construction at the Palo Alto Baylands, huge trucks. Then, apparently, our dear city leaders are planning to perhaps switch us from our clear, fresh Hetch Hetchy water supply to this processed water source. Wake up, Palo Altans.

I would not like to return to 'the good OLD days' of privies! No thrill there!

These local restaurants are donating meals to Bay Area residents in need. Here's how to help.
By Elena Kadvany | 6 comments | 10,737 views

Coronavirus: Plan ahead now for a big outbreak
By Diana Diamond | 17 comments | 3,811 views

Will the Coronavirus Save Lives?
By Sherry Listgarten | 27 comments | 3,660 views

The first few seconds after awakening; before I remember the virus
By Chandrama Anderson | 0 comments | 733 views