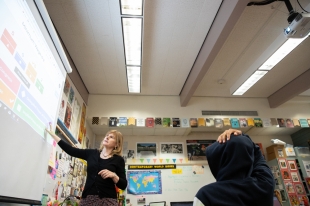 Sarah Block, who teaches English learners at Mountain View High School, says many of her students are working through trauma suffered in their home countries as they try to build better lives in Mountain View. Photo by Magali Gauthier

Can you Pay to Reduce your Carbon Footprint?
By Sherry Listgarten | 8 comments | 2,166 views

You Can Help: Scents and Migraines
By Chandrama Anderson | 0 comments | 1,899 views