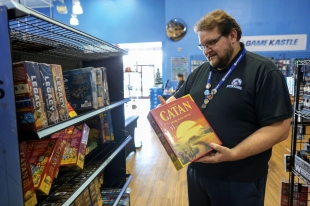 Kurt Harl assistant manager of Game Kastle, shows off the original version of Catan a popular board game. Catan sold at the store in Mountain View on Jan. 13, 2020. Photo by Sammy Dallal

Love hearing positive news for a change. Kudos to Mr Shaw for turning his passion into a successful business, something everyone hopes for but rarely achieves. To Mr Shaw: How about weekday daytime events for the retired set; Camp for Boomers LOL... seriously think about it.

As a former D&D player who's still interested in playing again (having a kid kind of reshuffled life's priorities) I'm glad Game Kastle is around.

I went into GameStop once, wanting to buy some dice, and walked right out again because they were 100% oriented toward video games. I thought to myself "this won't last" and I was right, look at GameStop now, about to go bankrupt (admittedly not due to board games, but more due to streaming games).

There's nothing quite like a good tabletop game to while away an afternoon with good friends.

We love Game Kastle! They were welcoming to us and our young kids.

The environment would be even better if hot drinks or even alcoholic beverages were available for purchase. A game cafe would be super fun.

Game Kastle was great about us bringing in our own food, though.

Report Objectionable Content
Email Town Square Moderator
13 people like this
Posted by abigailvr
a resident of Willowgate
on Jan 18, 2020 at 10:43 am

I love Game Kastle! If I want a game, I go there first, and often come out with something I didn't know I wanted as well. I'm a big fan of their game library. Being able to try out games and see how they play helps my family decide if it's a game we want or not. We have purchased games after trying them out there. I hope Game Kastle sticks around for the long haul and I'm glad to hear it is going well for them!

Report Objectionable Content
Email Town Square Moderator
16 people like this
Posted by Alex Basche
a resident of Another Mountain View Neighborhood
on Jan 19, 2020 at 9:07 pm

As someone who focuses on treating Technology Addictions in teens and young adults, it is AMAZING to see coverage like this.

Tabletop gaming is a prime example of how we can unplug, yet still have great fun along with a sense of achievement, mastery and community. Thank you for raising awareness of Game Kastle and the wonderful service it provides!

Please Apply So We Can Reject You!
By John Raftrey and Lori McCormick | 6 comments | 2,481 views