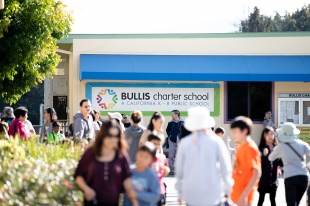 30 people like this
Posted by Oh REEEEALLY
a resident of Another Mountain View Neighborhood
on Jan 23, 2020 at 2:35 pm

Funny, all I have read from the Bullis crowd over the years was how they were completely free from preferences.
I wonder what other "preferences" are yet to be discovered?
The truth always catches up with you...good lesson for the kids and their parents...and Trump for that mater.

19 people like this
Posted by Get-along
a resident of Another Mountain View Neighborhood
on Jan 23, 2020 at 2:58 pm

If you tried googling, you would have seen exactly what the "preferences" are/were. There still are preferences, such as Siblings, LA school district, etc. BCS isn't hiding anything, they never did. Furthermore, there was also a time line to the ramp down of the Hills preference.

Instead of spreading hatred, why not take the high road?

Not only did the judge find LASD had no standing, but even if they did, the lottery preference is lawful by statute.

Report Objectionable Content
Email Town Square Moderator
44 people like this
Posted by Bored M
a resident of Cuesta Park
on Jan 23, 2020 at 4:28 pm

Do the defenders of Bullis' actions realize how ridiculous they sound when Bullis says they did nothing wrong, then concedes to a corrective action? I have no horse in this race, but retreating is usually a clear sign that you've made a mistake.

If Bullis is right, then keep on going! Perhaps the pressure of always being in the right is just too much for such a fine institution.


Report Objectionable Content
Email Town Square Moderator
6 people like this
Posted by a community member
a resident of Another Mountain View Neighborhood
on Jan 23, 2020 at 5:42 pm

Can someone clarify did Bullis indeed say they planning to restore the enrollment priority, or was it implied by LASD because of their expired agreement?

Report Objectionable Content
Email Town Square Moderator
17 people like this
Posted by Politics
a resident of The Crossings
on Jan 23, 2020 at 6:57 pm

The preference should have been entirely gone long ago. Even if the fact of discrimination is in dispute, any loosely-plausible interpretations over the line are a signal that harm might be happening regardless of intent. Stepping away from that line is always the right thing.

Having said that, between LASD and BCS this was entirely a contest of political power. BCS wanted to use the preference as a bargaining chip, but that opened them up to political attacks and LASD's complaint to SCCOE. And LASD ultimately got leverage through SCCOE to make the preference go away.

The SCCOE, prodded by the LASD letter, put BCS into an untenable situation by requiring them to prove a negative, that the preference won't discriminate. We talk about burden of proof (e.g. innocent until proven guilty) for a reason, because it's a tool of political power. Anything that can be used for power, will be used for power.

Report Objectionable Content
Email Town Square Moderator
8 people like this
Posted by Steven Nelson
a resident of Cuesta Park
on Jan 23, 2020 at 9:08 pm

ah, exercise of power / that is granted to the SSCOE because the County is the Charting organization, not the local LEA, LASD.

SO good. BCS administration/board-majority got knocked down a few notches. Had it coming to them, in this particular case. And IMO the County Board / using the administration they control / SCCOE / is doing a much better job this decade - than the horrible job they did in charter school oversight (even 10-12 years ago).

Report Objectionable Content
Email Town Square Moderator
12 people like this
Posted by LongResident
a resident of another community
on Jan 23, 2020 at 9:56 pm

I read the revised MOU. The County office said the change was required by changes to the state charter school rules as of 1 January 2020. That answers those that comment that the preference was wrong all along. Nope.

What's interesting is you have people saying how terrible Bullis is but then you have 400 K students applying this year when aside from those attending Bullis, 400 would be the ENTIRE K class from LASD. So something like 80% of the district wants to attend the charter.

The rub is that there is only 5% of the district kids who can be called disadvantaged. The county rationale is that the preference didn't include many at all out of the 5%. Seems it is EVERYONE ELSE who is not disadvantaged that wants to enter the Charter school. The district doesn't like Bullis because it is embarassed that the district schools are so UNPOPULAR. Really bizzare. You can't make assumptions because the whole district is an outlier case. Imagine if MVWSD only had 5% disadavantaged kids. That would be different.....


Report Objectionable Content
Email Town Square Moderator
22 people like this
Posted by Get real
a resident of North Whisman
on Jan 23, 2020 at 10:38 pm

We all recognize that this preference was gross. The district was right to protest it, the charter was wrong to even threaten to resurrect it, LaPoll was unwise to champion it as a bargaining chip. Just gross. It’s gone now, which is great, let’s move on. Lessons learned, hopefully.

Flying: How much is enough? It's personal.
By Sherry Listgarten | 9 comments | 2,162 views