by Ronald and Dorothy Schafer 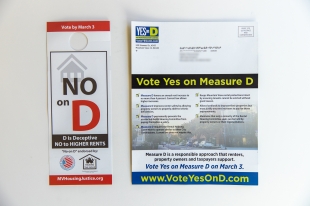 In a guest opinion, Mountain View homeowners Ronald and Dorothy Schafer write why they are opposed to Measure D, the rent control initiative sponsored by the City Council on the March 3 ballot.

I propose that they may have thought it was a the best compromise they could get and they figure if this passes then stronger measures are unlikely to pass. If I were them I would take that same tact, honestly.

See, there you go. An alternative theory that doesn’t try to make the other side look evil.

Any distortion to the market results in unintended consequences. The rent control for apartments has never been effective anywhere without negatively impacting some part of the population. Better to repeal all of the artificial controls and let people decide with their dollars where they can afford to live.

Report Objectionable Content
Email Town Square Moderator
9 people like this
Posted by The Business Man
a resident of Castro City
on Feb 7, 2020 at 10:22 pm

In response to Waylonis you said:

“Any distortion to the market results in unintended consequences.”

But you are ignoring that governmental regulations are a natural force in a market. You have never heard of the “Porters 5 Forces Model of Markets” (Web Link)

The applicable part of this is described here:

“Competition in the Industry

The first of the five forces refers to the number of competitors and their ability to undercut a company. The larger the number of competitors, along with the number of equivalent products and services they offer, the lesser the power of a company. Suppliers and buyers seek out a company's competition if they are able to offer a better deal or lower prices. Conversely, when competitive rivalry is low, a company has greater power to charge higher prices and set the terms of deals to achieve higher sales and profits.”

In this situation, here is very little evidence that can establish there is healthy competition. Given that the nature of the market has been skewed heavily toward only providing home ownership, and providing nothing but high priced products. Which is not appropriate for every person. The next force is:

“Potential of New Entrants Into an Industry

A company's power is also affected by the force of new entrants into its market. The less time and money it costs for a competitor to enter a company's market and be an effective competitor, the more an established company's position could be significantly weakened. An industry with strong barriers to entry is ideal for existing companies within that industry since the company would be able to charge higher prices and negotiate better terms.”

In this respect, it is not a strong influence because it is very difficult to have the resources to enter this business. Thus the current providers have no requirement to satisfy the actual needs of the market, but instead dictate what the market will provide. It goes on to say:

The next factor in the five forces model addresses how easily suppliers can drive up the cost of inputs. It is affected by the number of suppliers of key inputs of a good or service, how unique these inputs are, and how much it would cost a company to switch to another supplier. The fewer suppliers to an industry, the more a company would depend on a supplier. As a result, the supplier has more power and can drive up input costs and push for other advantages in trade. On the other hand, when there are many suppliers or low switching costs between rival suppliers, a company can keep its input costs lower and enhance its profits.”

Given that there is a recognized shortage of supply nationwide, and the ability of new entrants is restricted, the current provider again dictate the rates they will accept. And they do noy provide anything less than premium housing units. It goes on to say:

The ability that customers have to drive prices lower or their level of power is one of the five forces. It is affected by how many buyers or customers a company has, how significant each customer is, and how much it would cost a company to find new customers or markets for its output. A smaller and more powerful client base means that each customer has more power to negotiate for lower prices and better deals. A company that has many, smaller, independent customers will have an easier time charging higher prices to increase profitability.”

How this applies here is that the “customers” act politically to in effect “unionize” their market influences. By becoming an integrated group, which has more influence on the market, it can force prices to go down. This has always been an equal force that can and does control prices in either “voluntary” ways where the industry adjusts it prices to meet the customers needs, or “involuntary” regulations are put in effect to control pricesw where the evidence can be shown that price gougiong has become a normal part of the market. Finally there is the last force which is:

The Housing market does not give much space for a substitute product. Especially where the industry has significant barriers of entry, and services cannot be replaced with any equivalent. Meaning it is very hard to create an alternative to what people typically need to live, a roof over their head, the environmental controls, the ability to prepare food, the ability to self-maintain, and the ability to participate an any activities related to self-sufficiency.

You seem to be under the impression that this has been completely new. In fact there was “FEDERAL” rent control in effect up to 1965 because all housing project were public funded at that time. You finally said:

“The rent control for apartments has never been effective anywhere without negatively impacting some part of the population. Better to repeal all of the artificial controls and let people decide with their dollars where they can afford to live.”

Your language in effect to put it simply is that you want only those that meet your standards of living to be able to reside in your “neighborhood”? Do you consider anti-discrimination laws in housing an artificial control? To put it accurately, it is an artificial control. So just by denying the property sellers or providers the ability to discriminate has a direct impact on prices.

Report Objectionable Content
Email Town Square Moderator
13 people like this
Posted by Great piece
a resident of Slater
on Feb 8, 2020 at 9:00 am

You outlined what the intent of this measure truly is. Also, there is no guarantee the CAA will withdraw their November sneaky repeal if this passes. They are making hollow pinky promises and we already know they are slimy and dishonest.

And heartless Margaret, our current Mayor,is in bed with them and cheerleading their agenda. Our leaders should stop undermining the voter's intent. Hell, Margaret's Measure is trying to appoint their reps to the RHC!

This has to stop. She is up for reelection. Remember her actions when you vote.

Report Objectionable Content
Email Town Square Moderator
17 people like this
Posted by A resident
a resident of Rex Manor
on Feb 10, 2020 at 8:20 am

Measure-V forced the mom/pop landlords to sell and it had the opposite affect that the supporters of Measure V sought. Measure D will address the short comings.

Report Objectionable Content
Email Town Square Moderator
4 people like this
Posted by The Business Man
a resident of Another Mountain View Neighborhood
on Feb 10, 2020 at 11:49 am

In response to A resident you said:

You have no actual proof of this in multiple ways. The FIRST is that the CAA and local rental property owners actively prohibit the City from REQUIRING to maintain an actual DATABASE of what properties are rentals in the City and who owns them. The SECOND is that what is described as MOM AND POPS rentals, I remember Elizabeth Lindsey being a “MOM AND POP” that operated a $30 Million plus business trying to sell itself as a MOM AND POP. The THIRD is that if people buy basic apartment buildings only containing 10 units for $5 Million than it makes a strong argument that only those with money to gamble buy these properties. This is in effect a political smokescreen.. You went on to say:

“and it had the opposite affect that the supporters of Measure V sought.”

That is proven to be false. The act was to STABLIZE the costs of living in Mountain View. That it has done what it was sold to do. It was not sold to solve the affordable housing problem of either the U.S., California, or Mountain View. What the City Council tried to do is destroy the rent controlled units. But now SB330 puts a ban on that practice for at least 5 years. So you are not correct on that part. You said:

What PROOF do you have to support the claim that Measure D will do any more than what the CSFRA already does? Simply put, you want to make false claims with no scientific proof to back them up. There is no new research after passage of SB330 that would support your claim.

Flying: How to lower your impact
By Sherry Listgarten | 19 comments | 3,281 views

My angst about the disaster of these two debates
By Diana Diamond | 29 comments | 1,662 views