Buck’s of Woodside NFT goes for a few bucks


Buck's of Woodside is an institution that typically serves up pancakes to families, tech titans and other celebrities alike, but a month ago there was another offer on the table: One could bid on a non-fungible token that would give its owner exclusive access to a digital version of the restaurant. 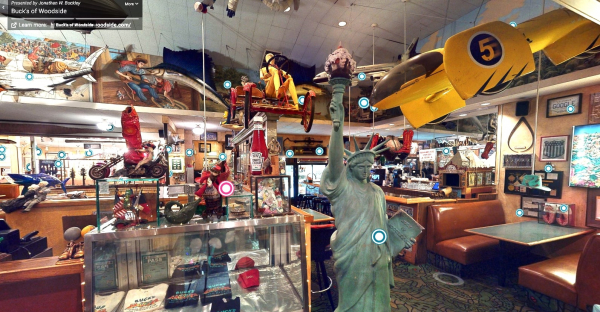 Buck's of Woodside went up for auction via non-fungible token. TeamWarren placed the winning bid, and now holds exclusive access to a digital recreation of the historic Silicon Valley restaurant. The brochure bills it as “the world's first 3D immersive NFT.” (Photo via Buck's of Woodside on Matterport)

The auction for Buck's NFT closed Thursday, August 19. The NFT went to the one and only bidder, "TeamWarren," for 105 WETH, a token that represents the Ether cryptocurrency. Even with just a single bid, the United States Dollar value for the digital recreation of the local restaurant is nothing to sneeze at.

"It was such a high-water mark no other bids came in," says Jamis MacNiven, the local restaurateur who hatched the idea for the project and brought it to life with about 16 co-creators. "We only had one bid, but it was $340,000. So it was OK."

OK, indeed. The NFT's new owner is identified as "TeamWarren" on the OpenSea auction platform, and as a friend by MacNiven. MacNiven says said friend initially placed the bid to "set the tone." When asked how much MacNiven wanted, he recalls, "I said 200 grand would be good," and he settled on accepting the bid via cryptocurrency. 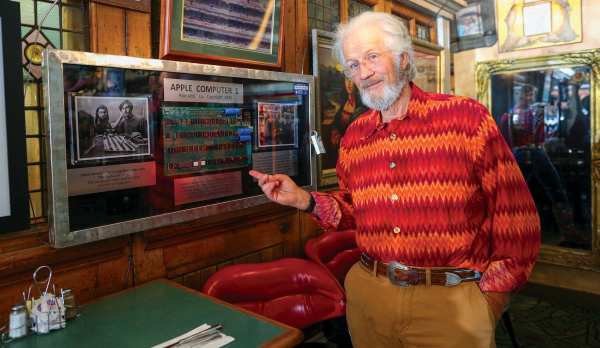 Jamis MacNiven stands before a display of the historic Apple 1 computer model. Even if the physical model isn’t available at the actual restaurant, whoever owns Buck’s NFT can digitally visit the display. (Photo by Sammy Dallal)

It wasn't a sure bet, however. Shortly after TeamWarren placed the bid for 105 WETH, the value dived, dragging down the USD value to about $146,000.

"I thought, 'Well, whatever, fine," MacNiven says. But by the time the auction closed, the value had climbed about 70% above MacNiven's initial hope.

TeamWarren now has access to a digital experience that makes it possible to virtually tour the restaurant, and take a look at dozens of eclectic items and stories that MacNiven has curated and collected over the years. Buck's is an institution for Silicon Valley companies, so there's a model of the Apple 1 computer on view. It's also a bit of a personal museum, with an artifact that was once owned by Jack London and later acquired by MacNiven's grandfather, as well as a family photo featuring one of the MacNiven sons gliding through the air, "paralooning" with a parachute powered by helium-filled weather balloons.

As the new owner, it's at TeamWarren's discretion as to whether to make the digital Buck's experience open to the public or not. "He could turn it off or leave it on. He's choosing to leave it on," MacNiven says. Soon, it'll be viewable at the restaurant's website, buckswoodside.com.

"We got our pancake, and you get to eat it too," MacNiven says.

Check out the digital Buck's of Woodside experience via Matterport, and the auction at OpenSea.

State Street Market plans overhaul of its eateries as it cuts ties with Bon Appétit, triggering layoffs
By The Peninsula Foodist | 11 comments | 4,198 views

Can the Memphis police behavior ever happen here?
By Diana Diamond | 14 comments | 988 views