If you haven't turned 70 yet, don't retire 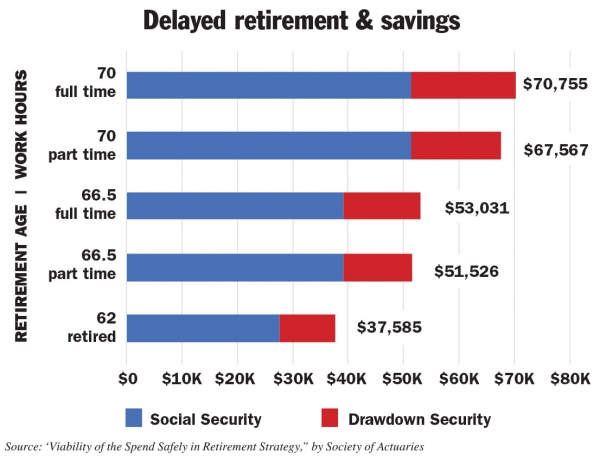 The May 2019 joint report by the Stanford Center on Longevity and the Society of Actuaries studied how middle-income retirees can best maximize their financial power so they'll have enough to live on as they age.

A Talking Cat is a registered user.


…and if you keep working forever and never retire, you'll keep accumulating money until you die! :/

3 people like this
Posted by Common sense
a resident of Another Mountain View Neighborhood
on Nov 6, 2019 at 9:52 am

Work until you die, retire in grave.

Gov. pension-benefits is a registered user.


That "transparent California" link on the story about the pay raise for the retiring CITY MANAGER provides some information. It shows high pay for most and abuse of overtime by some. At what age can city employees retire and what is the retirement compensation formula?

USA is a registered user.


To be clear, your retimement date and your start date for Social Security are two different dates. For example, you can retire for work at 62 then spend 8 years living on 401k, pension funds, general savings, and sale of your big house. As that money draws down over the 8 years, you then kick state Social Secutrity at 70 to kick in that $70k/yr.

Report Objectionable Content
Email Town Square Moderator
4 people like this
Posted by mvdad
a resident of Whisman Station
on Nov 6, 2019 at 2:26 pm

mvdad is a registered user.


Or we can tax the rich at 90% like we did in the 50s and everybody can comfortably retire at 55.

Report Objectionable Content
Email Town Square Moderator
7 people like this
Posted by Does not pencil out
a resident of Another Mountain View Neighborhood
on Nov 6, 2019 at 2:34 pm

Report Objectionable Content
Email Town Square Moderator
6 people like this
Posted by Nonsense
a resident of Cuernavaca
on Nov 6, 2019 at 2:37 pm

While you can obtain 32% higher SS benefits at age 70 compared to age 66 the tradeoff assumes you will live until your mid 80's. I think most people realize based on their lifestyle , they are unlikely to live that long and make the correct decision to take benefits at age 66. The report fails to take into account the opportunity cost of waiting and the appropriate discount rate to use.

Report Objectionable Content
Email Town Square Moderator
13 people like this
Posted by Fritzi
a resident of another community
on Nov 6, 2019 at 2:45 pm

Who is going to hire you or keep you working between age 66 and 70? Do you see many workers in that age bracket in our tech offices? When I read this advice I laugh, thinking of the many lay offs, time spent as a contractor trying to get back on board as a full time employee. Unless you are a professor, lawyer or Dr, it’s not too likely you will keep your job till you make 70.

Report Objectionable Content
Email Town Square Moderator
4 people like this
Posted by Bruce England
a resident of Whisman Station
on Nov 6, 2019 at 3:57 pm

I agree with USA. Get out when you can, away from that desk, into the fresh air. Your health will improve and hold longer. Retirement will provide limited benefits if you wind up suffering from various work-related maladies. No thanks. With the extra time, by the way, you can accomplish more by volunteering in the community with your new-found time available to you.

Groot is a registered user.


Report Objectionable Content
Email Town Square Moderator
4 people like this
Posted by Bill
a resident of Rex Manor
on Nov 9, 2019 at 8:26 am

This study is very flawed. Average death age 78 for a male. You can retire early if you do not live in CA and pay very high taxes and keep your good health longer. How much income do you really need if you live a frugal life? Retirement should be about the maximum length for quality of life not economic basis that assumes you should work longer for a certain income level and then spend you last few years in declining health.