Some say it's time for state to take over struggling utility, others decry too much government control 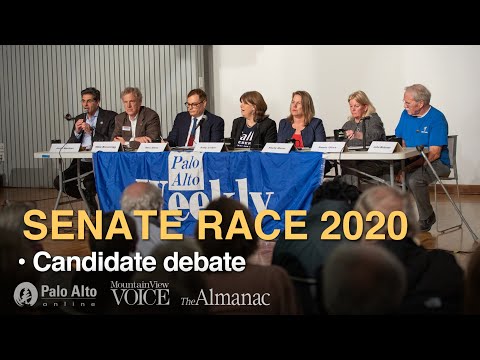 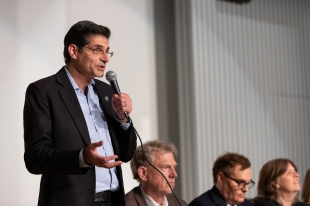 Josh Becker, a Democrat seeking to present California's 13th Senate district, delivers his opening statement to a crowd of about 200 people at a Feb. 5 debate with six other candidates at the Palo Alto Art Center. Photo by Magali Gauthier.

I was glad to see an overflow crowd at the event, and thought the answers (as well as the questions) told us a great deal about each candidate. We are lucky to have such a broad field running for State Senate, but Becker came out on top here, clearly. He has an excellent background and has proven he can successfully bring positive change.
The bickering between Lieber and Masur was distracting and unnecessary. Glew's comment on PG&E lost my vote, as it solved nothing. Olivia was clearly a spokesperson for the Realtor Association. Webster appeared sadly unprepared to comment except to blame government for everything. Brownrigg had good ideas, but was clearly outshone in all respects by Becker.

Becker is just a continuation of the failed policies that got us here. He is opposed to building affordable housing via SB50.

Becker's comment on tech companies building housing makes ZERO sense. Tech companies aren't real estate developers, how/why on earth are they supposed to build housing? And as long as he holds NIMBY, anti-housing policies, nobody can build housing no matter how much money they have.

This is just lip service. We need real change, and we should support candidates who have real actual solutions to housing. Masur is the ONLY candidate who supports SB50, a bill that would actually create housing. Vote for real housing change, not fake lip service from Becker.

Thanks for the report. SB 50 is high-density in single-family neighborhoods for high tech. Becker seems to have the right idea. Cities (and counties) should not continue to add or greatly expand job centers without space and a plan for adjacent housing. High tech itself builds neither office space nor housing. If cities face such limits, high tech will expand in areas with space - such as San Jose

Glad to hear we have candidates in favor of SB50 and building more housing. Too many candidates claim they want to solve the problem, but don't have any solutions.

The solution is simple--build more houses! Prices will come down. This is economics 101. Any candidate who is opposed to housing, or proposes non-sensical solutions, (like Becker) will not get my vote.

Report Objectionable Content
Email Town Square Moderator
7 people like this
Posted by Amazing
a resident of Cuesta Park
on Feb 7, 2020 at 3:25 pm

While most are well educated, none of them have a clue about building affordable housing or solving transportation issues. Masur is correct about building expensive “affordable” housing. Inclusionary Zoning is a miserable failure , reducing market based housing and making it more expensive for everyone else.

Report Objectionable Content
Email Town Square Moderator
3 people like this
Posted by Community Minded
a resident of another community
on Feb 18, 2020 at 5:40 pm

Shelly Masur’s strong background in serving on both a school board and city council equips her with the breadth of experience to address the most important issues in our area and in California. For California senate, I like candidates who have been elected to public office, and understand what it means to negotiate policy solutions with peers in public, make public decisions, and be publicly accountable to constituents. I would also like to see a woman in this seat. The California senate needs more women and the greater Bay Area needs a female senator.

Flying: How much is enough? It's personal.
By Sherry Listgarten | 9 comments | 2,189 views