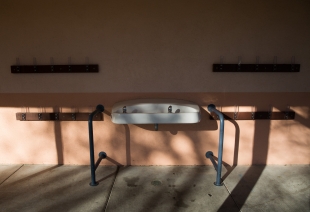 The water fountain being tested for lead contamination at Theuerkauf Elementary School was operational and uncovered when the Voice visited the campus on Feb. 6, 2018. Photo by Michelle Le


If one fountain produces far more lead than others, just replace it. I am told that lead in old pipes can also be released by the addition of some chemicals to the water supply - including the flouride added by the Santa Clara Valley Water District and the City of Mountain View. What do city officials say about that?

5 people like this
Posted by facilities manager?
a resident of Another Mountain View Neighborhood
on Feb 12, 2018 at 11:57 am

Is there a school district facilities manager? Really? He can'f get the fountain valves just turned off? Or the fountain covered? Time for the CEO, the superintendent, to just give him Negative Bonus. Maybe, if he gets a $2,000 cut in his public salary this year - he will take the safety of school kids a bit more seriously next time (oh yeah, these two schools are poor kid schools - no trouble)

Good investigative journalism Mr. reporter. Feet on the ground, nose to the wind.

I do not believe there is even one pediatric toxicologist on the staff of the school district. Parents, don't just believe, just trust, when the health of your children is at stake.

It could be due to the Chloramine used to treat the water. Here's a story about that: Web Link It's not described in the story, but my understanding is even the specific faucet head can be affected differently to produce lead in the water. Just change the faucet head first.

Report Objectionable Content
Email Town Square Moderator
7 people like this
Posted by concerned citizen
a resident of Monta Loma
on Feb 12, 2018 at 7:12 pm

I hope the drinking fountains inside each classroom have also been checked. From the article it appears that just a handful of faucets outside the classrooms were tested.

Report Objectionable Content
Email Town Square Moderator
3 people like this
Posted by John
a resident of another community
on Mar 1, 2018 at 11:57 am

Adults concerned about exposure to lead, mercury, arsenic, or cadmium can now get tested at home for toxic levels of these heavy metals. You can learn more here: Web Link

Please Apply So We Can Reject You!
By John Raftrey and Lori McCormick | 7 comments | 2,808 views

Flying: A letter from a reader
By Sherry Listgarten | 8 comments | 1,193 views